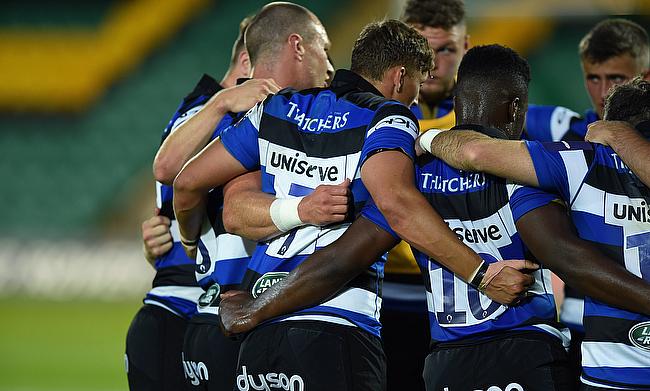 Luke Northmore: Cardiff Met have made this dream become a reality
Exeter, Hartpury, Bath and Beckett progress after thrilling BUCS Super Rugby quarter-finals
Beckett extend unbeaten run to secure top four finish
Bath’s Tom Dunn: ‘My advice would be to grab university rugby by both hands and run with it’

Louis Messer is hoping his University of Bath side can maintain the consistency and confidence they have been able to generate as they look to secure a place in the BUCS Super Rugby Championship final.

Bath will be aiming to build on a sensational quarter-final victory over Durham University when they face Hartpury University in the last four of the play-offs on Wednesday.

The Blue and Golds ended the domestic season in third place behind Hartpury and the Gloucestershire institution are also the current Championship holders.

But Messer has full belief in his players as Bath head into this semi-final clash on a six-game winning streak and they also beat Hartpury for the first time in the club’s history back in November.

“The evening last week [against Durham] was absolutely superb and it was a really good result all round for us,” the Bath head coach said.

“We don’t want to peak too early, but last week, I think we really showed some key principles and themes we have been doing throughout the whole year and things that we also worked on last season.

“As with any team in any sport, if you win six games in a row, you are going to look at yourself and think you have got some massive confidence.

“Hartpury is a hard place to go, but we definitely have loads of confidence. The boys will relive the experience of beating them when they go out there. It does give the boys a bit of wind in their sails and they should have that momentum on Wednesday.”

In the last two campaigns, Bath have been able to reach the semi-finals of the Championships but a Twickenham appearance has eluded them.

However, in an interview with BUCS last week, full-back Will Partington praised the ‘special culture’ at Bath and Messer feels the team ethos has put them in a good place this season.

“It is quite nice to hear Will say that without any influence from us coaches!” said Messer. “What he says is echoed by the staff and it comes from the consistency of our training and how we want to play.

“For me, it is the consistency of not panicking if things go badly because we trust what we believe in and I think the boys have more attachment to the environment this year from a playing perspective because they understand what we have been building.

“They also have a real attachment and they can start leading things. As a coach, you tend to take a step back a little bit and let those guys sort things. When that whistle goes, you can’t do much as a coach. They have to solve problems themselves and hopefully that approach benefits them and the team as a whole.”

Messer also balances his head coach role alongside his academy coach position at Bath Rugby and he plays an integral part in developing the player pathway between the university and the Premiership club.

?? | Good luck to @UOBathRugby, who are in quarter-final action tomorrow evening ?? Durham University. 8? @bathrugby Academy players feature in the side.

Since taking up the position in 2017, the link has strengthened and last Wednesday against Durham, the university had eight Bath academy players involved.

“My role, along with Mark Lilly, in relation to the partnership is looking at two types of students who go through the pathway,” Messer added. “There are guys who are 18 and contracted at Bath who decide to go to university, but there is also the other player who we nurture and they live in that professional environment we are trying to create within the university.

“That shows what the partnership caters for; those current people contracted and those people who hopefully at the end of their time at university, like Tom Doughty and Jack Davies, can go and aspire to be professional players.”

Bath are one of the leading BUCS Super Rugby sides in terms of their link with a Premiership club and Messer believes everything combined is creating more opportunities for young players.

“I do think it applies across the whole of BUCS Super Rugby as the teams provide that output for all players and I think it is an absolutely fantastic pathway for everyone,” he said.

“You see things across the league with Exeter and Exeter Chiefs as well as the likes of Northumbria and Newcastle Falcons which shows there is no better experience than actually playing rugby when you’re 21 years-old instead of holding them back and just trying to learn in training.

“You can’t ride a bike unless you ride a bike. You can’t better at rugby unless you play rugby and I think that is starting to become much more evident now with the strength of BUCS Super Rugby alongside the RFU noticing it and the academies attaching on to it as well.”

Messer, alongside Head of Rugby Aaron James, are now just one game away from Twickenham, but Bath must get past a Hartpury side who have won both BUCS Super Rugby Championship titles since the competition was introduced in 2016.

And after a very progressive season for the University of Bath rugby programme, Messer feels a trip to England HQ would cap off a successful year.

He added: “It would be the cherry on top in all fairness. It would definitely be an amazing experience and it would be a story to tell for many of the players, as well as staff, if we were to get to the final because of the journey we have been on.

“Would it be great to win and go to Twickenham in two weeks’ time? Absolutely. It would be amazing and it would be a huge credit to the staff and players if we can.”