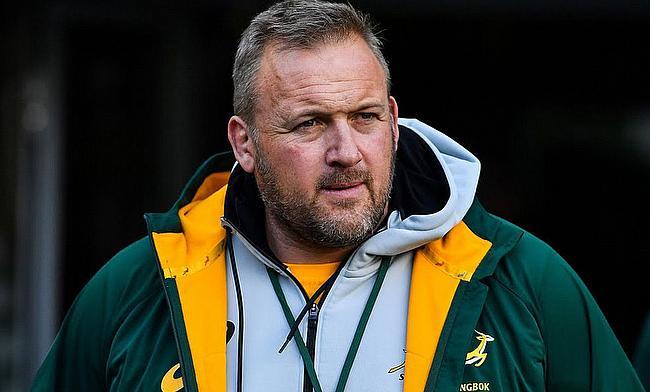 As much as Matt Proudfoot played for Scotland, the reason he is in his current job is because of his Springbok pack that dismantled England in the World Cup Final.

Uncompromising, unwilling to take a step back and quite frankly frightening, the 49-year-olds appointment was universally liked by plenty. Having worked primarily in South Africa as an assistant coach, as well as having a stint in Japan, the former Scotland prop lives and breathes scrummaging.

There is a grin on his face when asked about the new toys he has to play with in camp, another opportunity to make the world’s best front-row.

Having worked with the likes of Steven Kitshoff, Vincent Koch, Tendai Mtawarira, Frans Malherbe, Bongi Mbonambi and Malcolm Marx in the World Cup run, already several of his England students have begun to shine even brighter.

Luke Cowan-Dickie has become his country’s starting hooker, Ellis Genge is in the form of his life, Kyle Sinckler is in top class form and Will Stuart looks even more assured at test match level.

Even the uncapped Joe Heyes has grown after time spent in several England camps and is likely to pick up test caps this summer. Now with the likes of Trevor Davison, Jamie Blamire and Paul Hill in camp to see whether they can add to the England cause, Proudfoot says he is hoping to help the players improve even more than they already are.

???“You go to club games over the last three or four weeks and the atmosphere has been fantastic.”

Ahead of a summer with plenty of sport for fans to sink their teeth into, Eddie Jones discussed fans being back in stadia and more below??https://t.co/NsjHHXFUqL pic.twitter.com/imsknlKajE

Already there have been two blows to the forward ranks, Sean Robinson sustaining an MCL injury and Jack Singleton forced to self-isolate after coming in close contact to someone with Covid-19. As a result, Josh McInally (Bath) and Gabriel Oghre (Wasps) have been brought into Teddington to try and push for, at the very least, an England A cap.

This summer is an opportunity to push the memories of a disappointing spring to the back of England’s minds. Finishing fifth in the Guinness Six Nations, the performances out on the field looking rudderless and was more than warranting of the in-depth review that took place.

Eddie Jones and his staff were spared as part of this review, and although Jason Ryles and Simon Amor have left their posts, it is clear the group are hoping to turn the tides.

Bringing in Alex Codling to help with the forwards and then Ed Robinson to assist with skills and attack, it is unclear whether one of the key areas that was cited in the review, the breakdown, has been properly addressed.

It was the biggest downfall in England’s game plan, sides often able to launch attacks or turn the ball over, Proudfoot agreeing that that facet of the game was under par but underlining his and his colleague’s intentions to lead England to a Webb Ellis Cup.

“I think there were aspects of our game that weren’t up to standard and teams targeted us,” Proudfoot said. “It was the nature of the competition that led to unstructured play and that’s where your breakdown gets exposed.

This summer, several of England’s senior names are being rested after a long 12 months of constant rugby. Added onto that a number of regular internationals away with the Lions, the question is being asked about who is best to lead England against the USA and Canada.

Charlie Ewels is the answer for some, the lock forward having extensive experience at club level, but it is someone who Proudfoot is more familiar with that is on more lips. Leicester’s Ellis Genge has impressed many with his performances in recent weeks and has been captaining his club alongside his efforts on the field.

Perhaps the definition of leading by example, the 26-year-old is the most-capped player in Eddie Jones’ squad and whilst not the starting loosehead prop on a regular basis, sitting behind both of Mako Vunipola and Joe Marler when they are available, the former Bristol man has already taken like a duck to water to his new responsibilities in camp, potentially being the start of bigger things to come.

“It has really created a new dynamic for him,” Proudfoot said. “To see the way he speaks and the lessons he has learnt, he is passing them on. I was really impressed last season with the way he has led by example, he communication to the referees, how he tries to solve problems, particularly at scrum time in the moment.

“These are things I have paid special attention to and now he is getting the opportunity to do it with a lot of youngsters and the way he has been doing it is really, really good to see.”