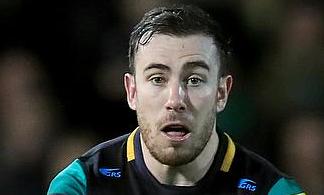 Munster maintained their unbeaten run in the ongoing Pro14 season as they defeated Dragons 16-28 in the fourth round at Rodney Parade on Sunday.

The opening 10 minutes saw teams remain levelled as Sam Davies and JJ Hanrahan exchange penalty goals. The opening try of the game came in the 14th minute when John Hodnett sent Matt Gallagher over the line to take the visitors to a 3-8 lead.

The Irish side further extended their lead to 15 points after Darren Sweetnam set up Calvin Nash over the line in the 25th minute with Hanrahan kicking a penalty and a conversion on either side.

However, the Welsh regional side cut down the gap to 10 points heading into the break with Davies' try. The second half started similar to the first with Davies and Hanrahan kicking penalties for their respective sides.

The game entered the final 10 minutes with the scoreline being 11-21 and that's when Casey, Hanrahan and centre Damian de Allende allowed Gallagher to touchdown for the second time in the game. Hanrahan's conversion took the Irish side to 28 points before Matthew Screech's try in the closing stage helped Dragons reduce their losing margin.