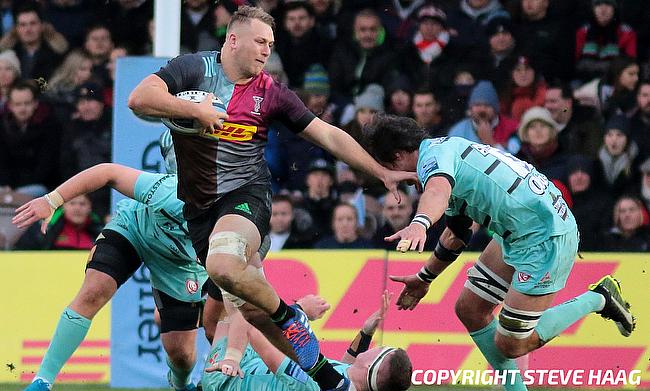 Joe Marchant scored a double as Harlequins completed a bonus point victory over Leicester Tigers in the final round of the Gallagher Premiership at Welford Road on Sunday.

The result means Harlequins have secured the sixth position in this season while Leicester Tigers finish with 11th with their 15th defeat from 22 games.

Leicester made 13 changes to the side while Harlequins had 10 changes heading into the encounter. The game also saw the Quins give a fitting farewell as he made his 300th and final appearance for the club.

Hooker Tom Youngs started the proceedings with a 11th minute try but Harlequins responded back strong after Alex Dombrandt ran from inside his own half to score while Brett Herron kicked the conversion to give them a two-point lead.

George Ford kicked back to back penalties in the 26th and 28th minutes before Herron kicked a three-pointer around the half-hour mark as the visitors reduced the gap down to one point making the scoreline 11-10.

As the break was approaching, Marchant crossed the whitewash with Herron improving as the opening half finished with a scoreline 11-17.

The start of the second half saw Nemani Nadolo and Joe Marchant exchange tries as the gap between the teams remained at six points before James Lang's touchdown in the 53rd minute made the scoreline 18-29. Ford with a penalty tried Leicester closing the gap but his effort was negated by a kick from Herron in the 61st minute.

Leicester were given a chance as the Quins were reduced to 14-men temporarily in the 65th minute when Jordan Els was sin-binned for collapsing a maul but all the home side managed was a touchdown from Matt Scott as Paul Gustard's men completed a six point victory.