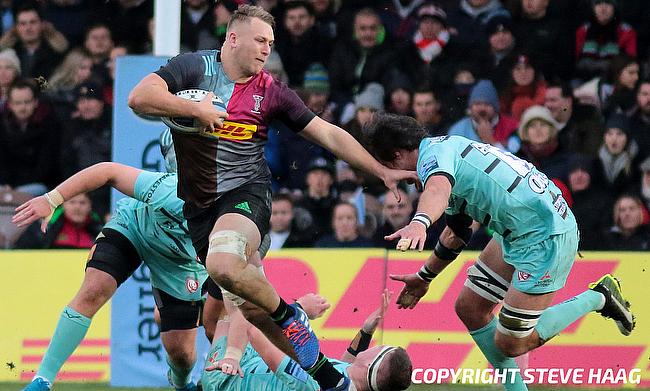 Harlequins successfully overcame a red card to Andre Esterhuizen as they defeated Gloucester Rugby 24-34 in the third round of the Gallagher Premiership at Kingsholm.

Harlequins now have moved to the fifth position in the table with two wins from three matches while Gloucester are at ninth place.

The Quins dominated the early exchanges with Smith making a chip kick that was gathered by Esterhuizen and eventually Dombrandt went over the line in the fourth minute. Smith also kicked the conversion to make it 0-7.

Gloucester got off the mark in the 16th minute when Billy Twelvetrees kicked a penalty goal but in an eventful 19th minute, referee handed yellow cards to both Jamal Ford-Robinson and Santiago Garcia Botta as both the teams were reduced to 14-men temporarily.

Smith with a penalty goal in the 23rd minute extended Harlequins lead but Gloucester levelled the scores in the 26th minute when as Ruan Ackermann sent Ed Slater over the line that Twelvetrees improved. As both the teams returned to full strength, Gloucester had an injury setback with Twelvetrees leaving the field with a leg injury.

As the half-time was approaching, James Chisholm's try followed by Smith's conversion provided the visitors a seven-point lead at the end of the opening half.

The Quins looked down and out at the start of the second half as Esterhuizen was red-carded in the 45th minute for elbowing Lloyd Evans while Glen Young was sin-binned three minutes later for collapsing a maul.

Despite numerical advantage on their side, Gloucester failed to score a single point and instead conceded two tries with Nathan Earle and Dombrandt touching down in the 58th and 63rd minutes with Smith's double conversion making it 10-31.

A double from James Hanson in the 68th and 74th minutes provided some consolation for the home side but Harlequins will be relieved to complete the game with a 10-point victory.