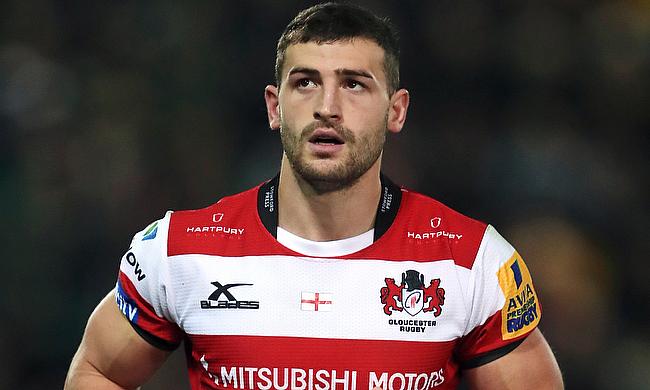 Jonny May was one of the try-scorer for Gloucester
©PA

Lloyd Evans contributed with 19 points as Gloucester Rugby edged past Newcastle Falcons 29-20 in the latest round of the Gallagher Premiership at Kingsholm.

This is third win for Gloucester in six games as they moved to the fourth place in the table while Newcastle Falcons are at seventh position.

Evans started the proceedings for the Falcons with a 40m penalty kick in the 10th minute and they were denied a try six minutes as Falcons skipper Will Welch won a crucial turnover at a ruck near his own line after they kicked a penalty on to the left corner.

The hosts doubled their tally in the 23rd minute with Evans kicking his second three-pointer in the 23rd minute making it 6-0. Just before the break, Gloucester increased their lead to 13 points after Val Rapava-Ruskin dived from close range at the back of a maul and Evans followed with the conversion.

A third penalty kick from Evans increased the home side's lead to 16-0 before Newcastle finally responded with Ben Stevenson dotting down after collecting an offload from Joel Hodgson, who also followed with a conversion and a penalty to reduce the arrears to six points.

Hodgson with a 38m penalty kick in the 61st minute made the scoreline 16-13 but Evans extended the lead to 12 points for the home side with a penalty from the right-hand side on 69 minutes and another three-pointer two minutes later.

With the clock ticking, Jonny May provided relief to Gloucester as he dived over after Stephen Varney went to the blind side off a maul and Evans kicked the conversion making it 29-13 which proved enough despite Cameron Nordli-Kelemeti's late try in the added minutes.