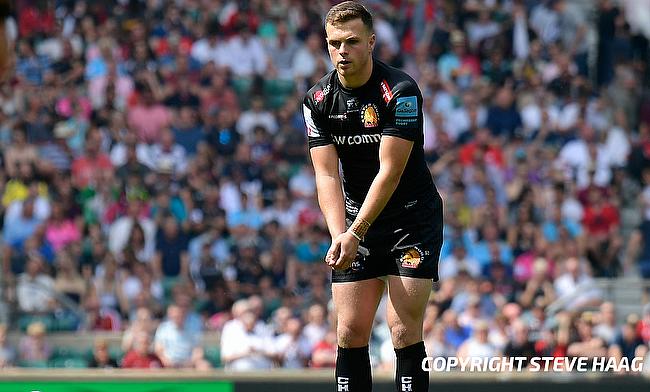 Joe Simmonds landed the decisive penalty goal in the closing stage as Exeter Chiefs edged out Northampton Saints 34-31 in the latest round of the Gallagher Premiership at cinch Stadium at Franklin's Gardens.

This is 10th win for Exeter in 17 games as they are at fourth position in the table with 50 points while Northampton have slipped to ninth position with 42 points.

The opening 10 minutes saw James Grayson and Simmonds exchange penalties before the Northampton fly-half kicked another three-pointer in the 18th minute to put Northampton in front.

The Chiefs seized the lead back in the 22nd minute with Simmonds offering a pass to Josh Hodge and the fullback ran 45m unopposed to dot down. Simmonds also followed with the conversion making it 6-10.

The momentum once again swung towards the hosts with this time Alex Coles breached the Exeter defence to offload to Matt Proctor, who squeezed to touchdown and Grayson kicked the extras to make it 13-10.

It was Rob Baxter's men, who went into the break in front as Dave Ewers powered his way over in the 32nd minute and Simmonds slotted the conversion with the teams completing the opening half with a 13-17 scoreline.

Northampton had a dominating first eight minutes into the second half during which they accumulated 15 points.

Skipper Fraser Fraser Dingwall brushed away a tackle from Simmonds before drawing in Tom Hendrickson and Hodge, and offloading to Collins as he forced his way over the line and Grayson followed with a conversion and a penalty goal making it 23-17.

Exeter were handed a lifeline as Northampton's Mitchell was sin-binned for a deliberate knockdown and Exeter made full use of the numerical advantage with both Jack Yeandle and Olly Woodburn scoring back to back tries in the 64th and 69th minutes making it 28-31.

Even though Francis struck a penalty from a metre inside the Exeter half in the 73rd minute to level the scores, Simmonds' successful kick in the final minute steered Exeter to a thrilling win.