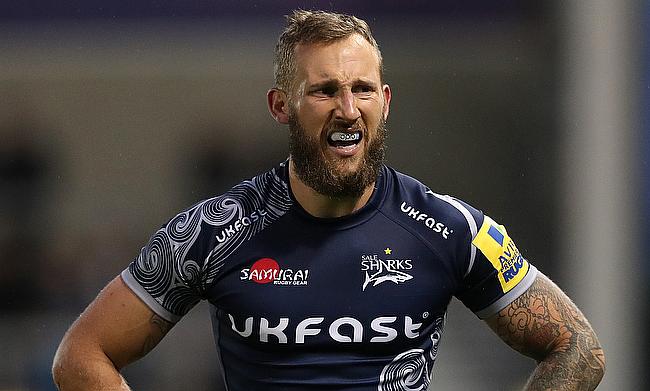 Sale Sharks managed to survive a 14-man scare from Exeter Chiefs as they registered a 25-20 win in the 10th round of the Gallagher Premiership at AJ Bell Stadium.

This is seventh win for Sale Sharks in 11 games as they move to third place in the table while Exeter are second despite the defeat.

The Chiefs had a 8-12 lead before they lost Jack Yeandle to red card in the 27th minute which provided an opportunity for Sale Sharks to bounce back.

The home side started the game off to a bright start when Faf de Klerk took a quick tap penalty which saw eventually Byron McGuigan going over the line for an unconverted try.

Exeter's response came in the 8th minute when Facundo Cordero went past four defenders to dot down and Joe Simmonds' conversion took them to a two-point lead which was short-lived as Aj MacGinty slotted a penalty kick in the 16th minute.

Repeated infringements from Sale hampered their progress as Exeter capitalised on a driving maul that allowed Sean Lonsdale to dot down in the 24th minute making it 8-12.

The 26th minute saw Sale Sharks lose Jono Ross to sin-bin for tackling Sam Skinner but two minutes later Exeter were dealt a major blow with Yeandle sent-off for striking the the head of Curtis Langdon.

Despite down by numerical advantage, Joe Simmonds kicked a penalty goal to make the scoreline 8-15 before the half-hour mark. However, as the break was approaching, Sale Sharks managed to level the scores as Bevan Ross dived from close range and MacGinty improved.

Exeter looked relentless despite down by a player as Sam Simmonds touched down at the back of a maul making it 15-20. Sale thought they narrowed down the difference when MacGinty breached the defence of Exeter and scoring but was ruled out.

However, it was a matter of time before the home side found the breakthrough as Curtis Langdon scored at the back of a maul and MacGinty followed with a conversion and a penalty securing a 25-20 win for Sale Sharks.