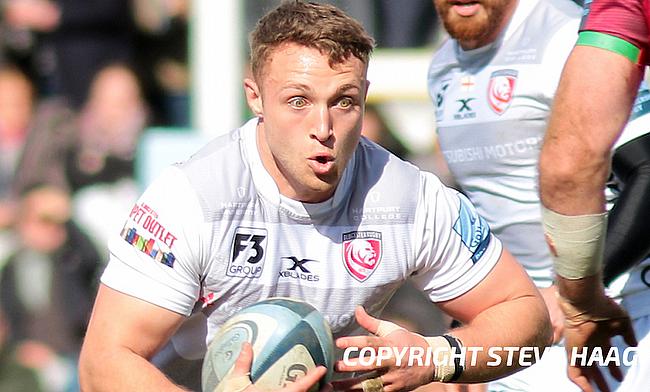 Ollie Thorley was one of Gloucester's try-scorer
©Steve Haag

Gloucester came up with a five-try performance as they defeated Newcastle Falcons 32-22 in the latest round of the Gallagher Premiership at Kingston Park on Saturday.

The result of the game which was moved to 7pm due to heavy winds meant Gloucester moved to fourth position in the table while Newcastle Falcons are at 9th position.

Newcastle Falcons drew the first blood as Brett Connon landed a 30m penalty in the third minute to get them off the mark but Gloucester responded back strong in the 6th minute prop Val Rapava Ruskin forced his way over the line though Adam Hastings missed out on the conversion.

The Falcons once again seized back the lead through try from Adam Radwan in the 8th minute that came after collecting a perfect offload from Sean Robinson. Connon missed out on the conversion as the scoreline became 8-5 before Santiago Carreras dived in the left corner and Hastings followed with the extras making it 8-12.

Hastings helped the visitors extend the lead with a penalty from the 22, and that increased further when Gloucester captain Lewis Ludlow crashed over for an unconverted try in the left corner from a close-range ruck making it 8-20.

Even though Newcastle clawed their way back with Mateo Carreras dotting down after collecting a 25m pass from Connon, who also kicked the conversion, Gloucester took control of the game as they scored two tries in a span of four minutes.

First it was Ollie Thorley, who rounded off a two-on-one in the left corner in the 59th minute and Louis Rees-Zammit followed the suit in the 61st minute. Lloyd Evans kicked the conversion on the second occasion as the scoreline became 15-32.

Even though, Charlie Maddison scored a consolation try for the Falcons in the closing minute, it wasn't enough for them as Gloucester completed a 10-point victory.