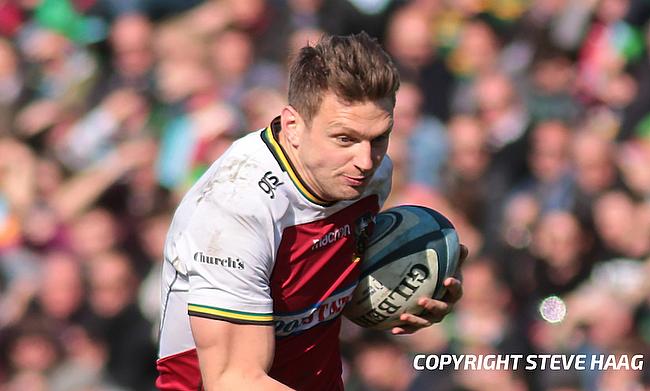 Northampton Saints have returned back to winning ways as they went on to defeat Worcester Warriors 29-13 in the 14th round of the Gallagher Premiership at Sixways.

The result meant Northampton have taken their tally to 40 points and are positioned fifth in the table while Worcester are languishing at the 12th place after losing their ninth game.

Worcester were given an early opportunity with a penalty chance in the 6th minute after Northampton strayed offside but they opted to kick to the corner and as they looked to score the opening points, Ahsee Tuala's interception kept them scoreless.

With Worcester kicking another penalty to the corner, they once again looked threatening but Ollie Sleightholme and Fraser Dingwall combined to keep Ashley Beck away from scoring.

The opening points though came in the 22nd minute for Northampton as Rory Hutchinson touched down at the back of a powerful maul as he went past a couple of defenders to score and Dan Biggar followed with the conversion before Fin Smith responded with a 24th minute penalty goal for Worcester making it 3-7.

The home side were down to 14 players as Perry Humphreys was sin-binned for a deliberate knock-on and Northampton capitalised on the opportunity with Sam Matavesi burrowing over in the 28th minute and at the stroke of half-time Alex Mitchell also dotted down as they finished the opening half with a 3-19 lead.

Biggar with an early penalty goal in the second half helped Northampton extend the lead to 3-22. As the final quarter kick-started, Worcester clawed their way back into the game hooker Rory Sutherland finally stretched over for the score, with Billy Searle missing the conversion attempt.

Nevertheless, Northampton sealed the bonus point by the 69th minute as replacement hooker Fish dived over at the back of another line out drive and Biggar's conversion saw them complete a 16-point victory as they remain in contention for the top four position.