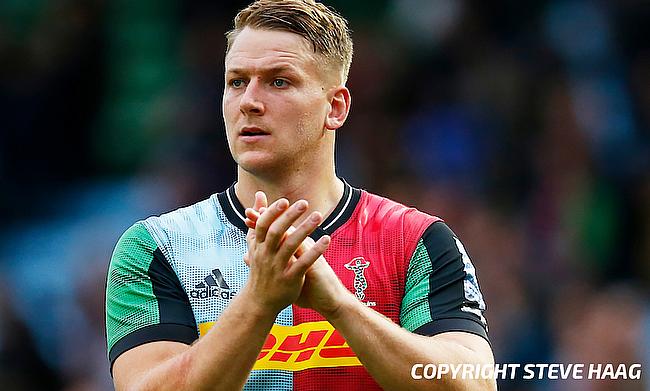 Alex Dombrandt starred with a hat-trick as Harlequins went on to beat Northampton Saints 41-27 in the 11th round of the Gallagher Premiership at Twickenham on Monday.

Playing in front of 72,785 spectators, Harlequins were without their star fly-half Marcus Smith, who had tested positive for Covid-19 but William Edwards on his second Premiership start kicked three conversions and a penalty.

Northampton were the first to open their account with Juarno Augustus diving over after a line out in the second minute and Dan Biggar got the conversion spot on. The Quins responded back almost immediately with Dombrandt scoring the first of his three with a dive from close range in the 6th minute and Edwards' conversion meant the scores were levelled.

The momentum once again shifted towards the Saints as Augustus completed his second try in the 9th minute after collecting a kick from George Furbank and five minutes later Alex Waller burrowed over the line. With Biggar kicking the extras on both the occasions, Northampton raced to a 7-21 lead in the opening 15 minutes.

The Quins made a stern fightback as Cadan Murley was set up by Dombrandt and Edwards to dot down in the 17th minute and around the half-hour mark the winger once again went over with Edwards creating the space once again. The fly-half also kicked both the conversions as the scores were levelled 21-21.

Even though Biggar with a 33rd minute penalty goal put the Saints into the lead, it was short lived as Danny Care went on to feed Dombrandt for a touchdown in the 38th minute but the conversion went wide as the teams completed the opening half with a 26-24 lead.

Biggar helped Northampton get off the block early in the second half with a penalty goal in the 44th minute but soon Harlequins claimed their fifth try with Louis Lynagh speeding past Courtnall Skosan to dot down to make it 31-27. Edwards, who missed out on the conversion made amends with a 72nd minute penalty goal to extend Harlequins lead to seven points.

The 73rd minute saw both the teams reduced to 14 players with Rory Hutchinson and Danny Care sin-binned but Dombrandt ensured there was no slip up for the Quins with his third try of the game in the final minute to complete a 14-point victory.