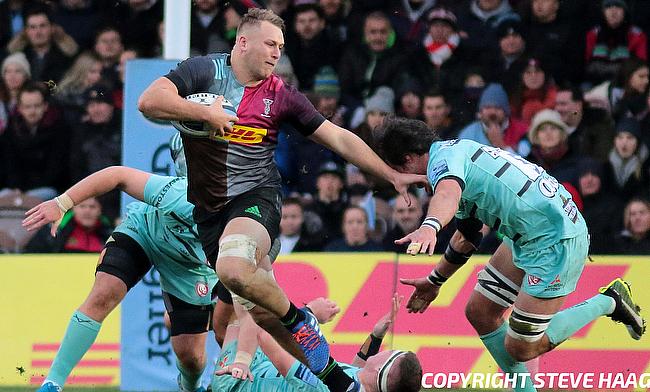 Harlequins managed to hold off a second half fightback from Worcester Warriors as they went on to win 35-29 in the second round of the Gallagher Premiership at Twickenham Stoop.

This is second successive win for the Quins in as many games as they moved to the second place in the table while Worcester are at fourth with seven points.

The game also Sara Cox officiating as she became the first woman to referee in a Premiership game.

Owen Williams helped the Warriors open their account with a third minute penalty goal but the response from the Quins came in the 17th minute with Louis Lynagh diving over in the 17th minute and Tommaso Allan kicked the conversion to make it 7-3.

Around the half-hour mark, Harlequins extended their lead further with Alex Dombrandt touched down in the 31st minute and four minutes later Worcester were reduced to 14 players temporarily with Heward Noah sin-binned for accidentally taking out a man in the air.

With the numerical advantage on their side, Quins got their third try before the break as Harlequins kicked another penalty to the corner and from the line out, Caden Murley dived over while Allan kicked the extras as the opening half ended with a 21-3 lead for the home side.

The visitors were the quickest to get off the block in the second half as Ollie Lawrence powered his way over in the 43rd minute and Williams slotted the extras making it 21-10. Nevertheless his effort was negated as Joe Marchant dotted down in the 54th minute that Allan improved it making it 28-10.

Willi Heinz kept the Warriors in the game as he collected a grubber kick from Williams to score his second try in as many games and three minutes later Will Chudley, who replaced Heinz also went over to make it 28-24 by the 64th minute.

As the game headed into the final 10 minutes, it was Harlequins who had a four point lead and Dino Lamb provided them the extra cushion as he dived from close range and Allan again got the kicking right making it 35-24.

Even though Warriors gave one final push through Marc Thomas' try in the final minute, it wasn't quite enough for them to go over the line as Harlequins maintained their perfect start to the tournament.