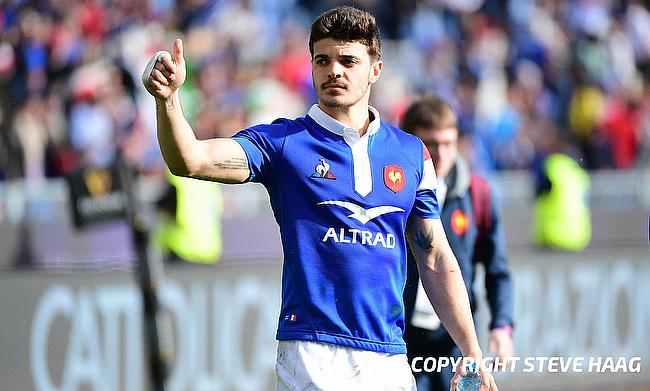 Romain Ntamack was part of winning France side
©Steve Haag

Damian Penaud and Peato Mauvaka scored double as France went on to beat Georgia 41-15 in their Autumn International fixture at Stade de France in Paris on Sunday.

France looked less convincing at the start but were greatly aided by ill discipline from Georgia with Melvyn Jaminet starting the proceedings with an early 9th minute penalty goal which were their only points in the opening quarter.

The resistance from Georgia was hampered as Tedo Abzhandadze was sin-binned in the 18th minute for a high tackle but despite that Davit Niniashvili kicked a three-pointer in the 21st minute to level the scores.

Nevertheless, the pressure eventually got to the visitors as France were awarded a penalty try when Giorgi Melikidze collapsed a maul near the try-line and was also sent to the sin-bin in the 23rd minute making it 10-3.

Just over the half-hour mark, France extended their lead further with Romain Ntamack setting up Matthieu Jalibert over the line following a line out and Jaminet kicked the extras making it 17-3.

The Les Bleus looked dominant heading into the break as they got their third try after a combination of Antoine Dupont and Gael Fickou allowed Penaud to touchdown and Jaminet improved as they finished the opening half with a 24-3 lead.

Vasil Lobzhanidze helped Georgia reduce the arrears with a 50th minute touchdown but his effort was negated with Mauvaka, who replaced Julien Marchand after the latter sustained a rib injury powered his way over making it 31-10.

Akaki Tabutsadze provided some consolation for Georgia when he went over the line in the 65th minute but Penaud and Mauvaka completed their second tries in the final 10 minutes as France went on to complete a 26-point victory.