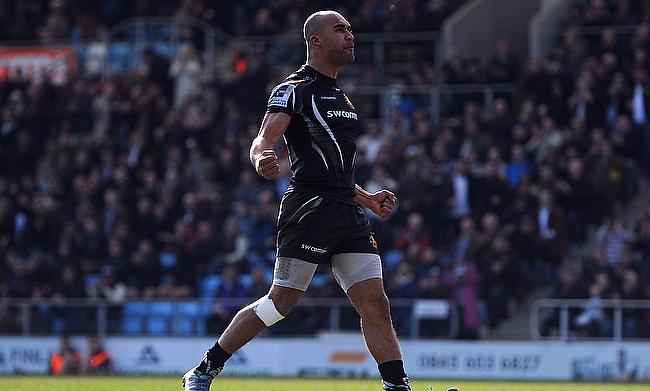 Jacques Vermeulen scored a double as Exeter Chiefs edged out Sale Sharks with a 19-12 margin in the 19th round of the Gallagher Premiership at Sandy Park on Sunday.

This is fourth consecutive win for Exeter and 11th in the competition as they are at fourth position in the table while Sale Sharks slipped to seventh position.

Exeter dominated the early phases as Tom O’Flaherty and Tom Hendrickson ran into Sale defence before the latter slipped the ball into Olly Woodburn, who dived over the line in the fourth minute and Joe Simmonds kicked the conversion to make it 7-0.

Having won a penalty midway through the first half, the home side kicked it to corner setting up a chance of a 5m line out and eventually Vermeulen dotted down in the corner in the 21st minute but the conversion from Simmonds went wide.

Sale's problems compounded further as they lost Sam James to sin-bin for a deliberate knock on as Hogg looked to release Woodburn outside of him.

With the additional player advantage, Exeter increased their lead further as Vermeulen went past AJ MacGinty to burrow over and Simmonds got the extras right this time as they scored 19 unanswered points in the opening half.

Sale had already lost Raffi Quirke, Coonie Oosthuizen and skipper Jono Ross in the opening half and after the break replacement Cameron Nield was stretchered off the field following a collision.

The visitors finally showed resilience and got their first points in the 52nd minute as Ewan Ashman cut a lovely line back through the middle of the Exeter defence to charge over and MacGinty kicked the conversion to make it 19-6.

Exeter were desperate for the bonus point but had tries from Tom O’Flaherty and Sam Skinner ruled out before Curtis Langdon's late try helped Alex Sanderson's side reduced their losing margin.