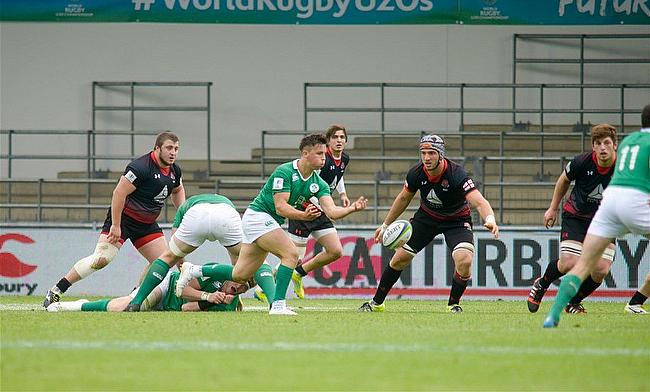 World U20 Championships runner-up Niall Saunders speaks exclusively to TRU about Ireland's recent campaign, his decision to pull on the famous green jersey and following in his father's footsteps.

Everybody thought that England would challenge for the World Rugby U20 Championships, right? With it being on home soil and the fact that England have won it twice before meant they were certainly one of the favourites for supremacy.

Five time winners New Zealand, South Africa and European and Grand Slam champions Wales would’ve been hoping to become the world’s best. In the end, it was the hosts who clinched glory and the headlines, but there was another team who impressed and even upset the odds throughout the competition and that was runners-up Ireland.

Not really given a chance with Wales and New Zealand in their Pool, Nigel Carolan’s side produced some excellent performances with a team that oozed talent. Max Deegan was named player of the tournament and the likes of Andrew Porter, James Ryan and Jacob Stockdale also shone, but there was one other youngest whose journey to the top took another step in the right direction.

Rob Saunders is currently Ireland’s youngest ever captain at the age of 22. He appeared in the Rugby World Cup for his country in 1991 and now 25 years later, his son is now looking to follow in his footsteps. Despite being just 18 years old, current Under 20 star Niall Saunders is certainly becoming his own man, perhaps trying to do things his way to enable him to reach the heights his father did. But it is impossible to escape the romance instilled in father and son each performing for their country on a big stage.

“To have a Dad who played right at the top of the game is special,” says Niall. “He is vital in helping me progress further with my career. With him being a scrum-half as well, it is great to be able to gain advice from him. What he achieved is brilliant and I am hoping to do the same or even better that!”

Niall played a vital part in leading Ireland to their best ever finish of second place at this year’s U20 World Championships, even though his contributions to their run to the final against England may have perhaps gone a little under the radar due to a number of appearances off the bench. However, that did little to dampen his spirits.

“I made my debut in March of this year for the U20s, but If you had told me I would have been playing in the U20 World Cup for Ireland at the start of the season, I would’ve thought you were joking!” adds Saunders. “To go on and feature against England in the final was just incredible too. To have my Dad and extended family over to watch the final in Manchester just added to the occasion.”

Saunders made his first ever start for the U20s in their final Pool match against Georgia after Ireland had produced outstanding displays to beat Wales and holders New Zealand. His performance further enhanced his profile in the game especially with him being one of the youngest players in the side.

“It didn’t really affect me being one of the youngest in the squad” says Saunders. “We have a great chemistry in the side which certainly helped us reach the final. We have a laugh and a joke when we are away from the game, but when we are training, we are fully focused on what we need to do and that balance is key I think,”

His talent at just 18 is remarkable and his rise to the top his slowly gathering pace. The latest Saunders scum-half is certainly going places especially after signing a two-year deal with Harlequins’ Academy which is set to begin this month.

“I have always been a Harlequins fan so to have been offered this remarkable chance really is a dream come true,” adds Saunders. “I have been involved with the club since I was 13 years-old and the set-up there is excellent.  Now I cannot wait to get going for the new season ahead.”

The job of reaching the top is far from done for Saunders but his rapid surge to this point in his career is impressive, having started out at Cobham Rugby Club as a six year-old back in 2004.

He then joined up with Quins while also representing Surrey U15s and more recently Epsom College where he captained the side to the Champions Trophy Final at Allianz Park last November. On the international front, Saunders was involved with the Ireland Clubs and Schools program through the Ireland Exiles meaning he only had eyes to pull on the green shirt despite being raised in England.

“Never did it cross my mind to play for England!” Saunders says. I am Irish and my whole family are too. Ever since I remember taking an interest in rugby, I have always wanted to play for Ireland and no-one else.

“I always look back on my time with Cobham and also the good years I had at Epsom. The experiences I had there, especially captaining the side, have helped me learn new things about the game and I am looking forward to improving at Quins over the next two years and featuring more for Ireland.”

Even though Saunders’ career is in its embryonic stages, its’ clear his dedication and hard graft at a very early age has been worthwhile. He is always looking to better himself and has developed a mature mentality which at 18, is extremely creditable.

It seems that the name of Saunders will always have a place in Irish rugby history and young Niall is hoping to write a new chapter and follow on from his father’s achievements.