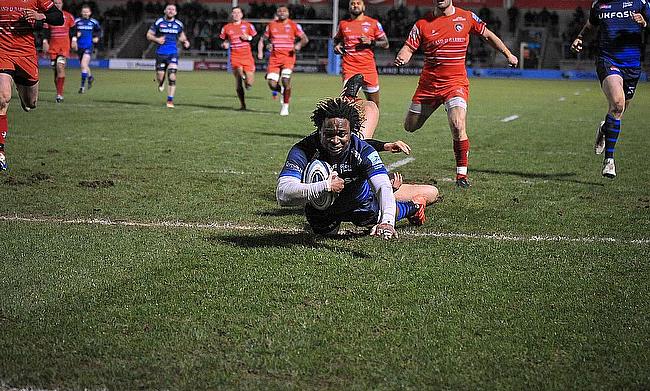 After seeing both Jean-Luc du Preez and Luke James receive yellow cards in the second half against Leicester Tigers last Friday night, Sanderson’s Sale Sharks once again displayed their immense character to clinch an important victory at the AJ Bell Stadium.

The individual efforts of fly-half AJ MacGinty and the superb Faf de Klerk were highlighted by BT Sport’s Martin Bayfield and Ugo Monye, but the analysis concluded with a segment on Marland Yarde.

It was his try on the 68th minute which ultimately sealed a fifth successive Premiership win for the Sharks.

“He is really happy!” Sanderson said. “He has conversations with me where he tells me he is happy! He is playing great rugby and for me, a lot of it is if you are happy in your life outside of the game, you play better on the field.”

Back in the groove with a the numbers back.

Yarde rounds off a fine bout of pressure inside the Tigers 22 to score.#SALvLEI | @Acronis pic.twitter.com/hjuIcn8eWq

Sanderson’s response was prompted by Bayfield asking Sale’s Director of Rugby whether or not Yarde ‘had his mojo back’. Three-and-a-half years have passed since the winger ended his tumultuous Harlequins career by moving to Manchester, but it now looks as though the 29-year-old is playing with bags of confidence, but crucially, he has a smile on his face again.

Whilst Yarde’s character and commitment were making unwanted headlines before he was unveiled as a Sale player in 2017, those potential perceptions of the winger quickly shifted following his serious and well-documented injury.

Against Newcastle Falcons in October 2018, Yarde slipped and two players fell on his left leg, dislocating and rupturing ligaments in his knee.

As our conversation continues, Yarde casts his mind back to arguably the lowest ebb of his career, but the hardship he experienced during his rehabilitation has shaped him into a player who is becoming an increasingly important part of Sale’s evolution.

“I have probably been in that tackle over 100 times in my life, but the one time it didn’t go right, something happened and it was a career threatening injury in my case,” Yarde tells TRU.

“It does put things into perspective because I’m working hard every single day and I’m enjoying it as much as I can. Every time I get to put the shirt on, put my boots on and run out at a stadium, it is my favourite time of the week. It brings the 15-year-old kid out of me who just loves playing sport.

“That’s where I really get my enjoyment because it could be taken away from you at any time. That is where I have got a real appreciation for playing the game. It’s sometimes hard in sport to think like that, but sometimes you just need to enjoy being in the moment.”

Over the last two seasons, Yarde has been a regular starter for Sale since he returned from his nine-month lay-off and he says he owes a debt of gratitude to his close support network of family and friends who helped him through one of his most difficult challenges to date.

But despite undergoing three operations and experiencing the long road to recovery, Yarde admits his outlook and approach to life was something he reflected on throughout his extensive period on the sidelines.

“I first hand know that I was struggling loads over that period of time,” Yarde says. “You begin to question whether you are going to be good enough when you get back. Once I got back playing, in those first few months, I really struggled to get to those levels that I know I am capable of and that really, really bothered me and got me down a lot.

“I had a lot of sleepless nights and I’d always try and bottle my feelings up, but what I had was that support of my friends and family who continued to believe in me and knew I could get back to the levels that I am at now.

“I think with a long injury, everyone always looks at the destination as well, but for me it was all about progress and the little steps and I think that has helped me change a lot.

“In sport and with injuries, you are going to have the good days and the bad days. You are sometimes going to have those bad days where you feel like you want to give up, the rehab isn’t working, things aren’t improving, but it is just important to go through your processes and I think that was key to staying mentally strong.

Proud to be a #RestartRound ambassador supporting @RestartRugby and players’ mental health.

“Making life a lot easier” is also where the RPA’s charity comes in. Yarde is an ambassador for Restart, who support professional rugby players suffering from serious injury, illness or hardship and the winger’s own journey is a factor in why he wanted to get involved.

“I think mental health awareness is becoming so important and it has been highlighted more in recent years for professional athletes and for males in general to be able to speak out,” Yarde says.

“In a sport like ours, sometimes showing weakness is something which we are not used to so having a charity like Restart is absolutely huge where you have got them on hand at all times to discuss problems whether that is on the field in regards to performances or selections, or off the field in the form of injuries, bereavement, finances etc.

“Whatever it is that maybe be bothering you, you have got someone there to help you and it is a charity that is really vocal. They are out there and they are always there to help. It is absolutely huge for us to have something like Restart available to us because we are athletes, but we are also human beings. We are not immune to our own struggles.”

The recent Restart campaign has been running for the last fortnight and will conclude on Sunday, but Yarde is keen for the messages around mental health awareness to continue beyond this weekend.

In terms of his work on the field, Yarde hopes to maintain his eye-catching performances as Sale look to nail down a top-four finish in the Gallagher Premiership for the first time since 2006.

Whilst their pursuit of the play-offs is firmly on his mind, he may also be in the frame for an England recall this summer.

Yarde has not been able to add to his 13 international caps since his last involvement in 2017, but given it is another British and Irish Lions year, the door could be open for the Sharks winger to make his way back into Eddie Jones’ plans for fixtures against the USA and Canada, respectively.

“It always will be in my mind,” Yarde says. “I was around the England squad from 2013 up until 2018 and obviously I had my injury. I haven’t really been back since. I remember during my rehab just sort of thinking that if I have done all my ligaments in my knee and I am able to come back to play at a level where I am playing in the Premiership week in week out, then I can compete at international level.

“A lot of people always say to me that if you are doing the right things, everything else should look after itself. If I do get selected, then I would be absolutely thrilled and it would be a special honour for me but I can’t think about that too much because that is when you sort of overthink things. We have got an important game against Bath on Friday and that is my only focus right now; to be the best version of Marland Yarde on Friday night.”

Sale are massively benefitting from Yarde’s current mentality, as well as the ethos and the level of detail Sanderson has brought to the club since returning to the North-West in January.

The Sharks Director of Rugby has placed a huge emphasis on the psychological aspect of Sale’s game, typified by last Friday’s gutsy win over Leicester.

"I'd rather play with 15, it's better for my heart!" ??@SaleSharksRugby have spent three hours this season playing with 13 or 14 men ??

Their discipline is beginning to take its toll on Alex Sanderson! ??#GallagherPrem pic.twitter.com/jRewIusjA8

“I think that togetherness is the main thing,” Yarde adds. “We are all on the same page and fighting for each other. We have clear messages, we know how we want to play and I think that is the most important thing.

“We understand our roles and our responsibilities within that framework if we go down to 14, 13 men like we did against Leicester! That is why it probably looks a little bit more comfortable on TV because we do train for those sort of high-pressure moments. Of course, we want 15 guys on the pitch at all times! We train it because we want to be prepared for it and those are the minimum standards we set and the standards Alex has set.”

Yarde has frequently used #chasers on Twitter this season following a Sale victory, but rather than the meaning behind the hashtag relating to the Sharks hunting down their first league title in 15 years, it is to do with the winger aiming to be the “best version of himself.”

Sale are well aware they need to remain on an upward curve if they are to reach the Premiership final on June 26th and if they are to go all the way, the mentality, the attitude and the ‘mojo’ of players like Marland Yarde will be crucial to any success Sanderson’s side has.