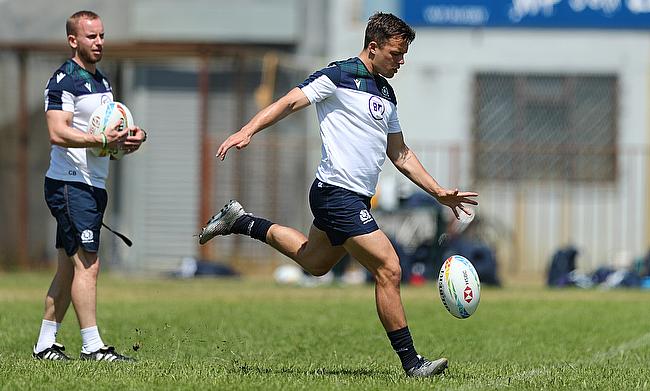 Scotland play against Samoa, Australia and the USA in Pool C
©Scottish Rugby/SNS

This week six Scots were named in the extended Great Britain women’s Sevens squad that is beginning to prepare for Tokyo - and a number of Scottish men are also trying to make their mark in a bid to be considered for the showpiece event in Japan this summer.

No doubt Great Britain men’s head coach Simon Amor will have a close eye on all English, Welsh and Scottish players this weekend as the fifth leg of the HSBC World Series takes place in Los Angeles, USA.

And with the Singapore and Hong Kong legs for 2019/20 having been moved back to October due to the Coronavirus threat, the players who are in contention for the Olympics know they now just have four more events - Los Angeles (February 29-March 1), Vancouver (March 7-8), London (May 23-24) and Paris (May 30-31) - to impress.

Scotland playmaker Lowe, who has played on the circuit since 2014 and will win his 39th Series cap in LA, is one such player looking to catch Amor’s eye - and having had a taste of the extended GB squad in 2016 before Rio he wants to go one better this time around.

“The Olympics is definitely a goal for the summer, but in sport you just have to stay in the moment, keep having games and tournaments and see where it takes you,” Lowe, who turns 25 on Sunday, told TRU.

“I will just go game by game and try and keep my form going, but definitely there are guys in this current Scotland squad who can put their hands up for Great Britain selection.

“There is loads of talent in our squad, boys are playing well and we managed to beat England in Cape Town so people know what we can do when we are at our best.

“It will all come down to Simon [Amor] and the way he wants to play at the Olympics and the players he sees best fitting into that system, but we will certainly all be giving it everything to be part of the selection conversation.

Will the champ come from this pool? pic.twitter.com/PGpVUjWQVo

“Obviously being part of the wider squad four years ago when the guys then went on to win a silver medal was great and gave me an idea of what to expect - it would be brilliant to get that kind of opportunity again.”

Rewind to 2016 and Lowe was feeling in really good form when he came out of the Team GB Olympic camp.

“Then I dislocated my right shoulder in Dubai at the start of the Series in late 2016 before I rehabbed it and got back for the Sydney event early in 2017,” the man who played club rugby for Ayr and Glasgow Hawks said.

“However, I dislocated the shoulder again in Australia and it meant that I would go on and miss the rest of the 2016/17 season which was really gutting. After I had the operation it was a long process to get back to full fitness, but James Johnstone [now with Edinburgh Rugby] was out with the same injury and we helped each other stay motivated while the staff we were working with were top class.

“Since then I have missed the Commonwealth Games in 2018 because I pulled my hamstring the week before. That was a setback, but I have played every Series tournament over the last two and a half years and the World Cup in San Francisco, so, touch wood, my fitness stays as it is now as I am feeling in a good place.

“I have learnt from time on the sidelines to enjoy every moment.”

“We are now a lot more aggressive in defence”

Scotland head into the Los Angeles event - which is being held at the Dignity Health Sports Park on the outskirts of the city after the USA leg was moved from Las Vegas - in 12th place in the standings.

They have former co-captain Jamie Farndale back from Edinburgh Rugby for this leg and the following one in Vancouver while young prospect Kyle Rowe, a core player, returns after a shoulder injury.

Scotland have been drawn in Pool C with the hosts, Australia and Samoa in LA and ahead of the event Lowe said:  “It is always good to get a fresh approach to things and since head coach Ciaran Beattie came in at the start of the season he has done a lot of good things and he has made a number of changes to our defensive structures.

“He has made us a lot more aggressive in defence and this is a young squad that is learning all of the time and buying into what he is trying to do. We have shown in spells what we are all about this season to date, now we want to do it on a more consistent basis.”