Sarah Beckett: "You get to live your dream day in, day out. It is sensational" 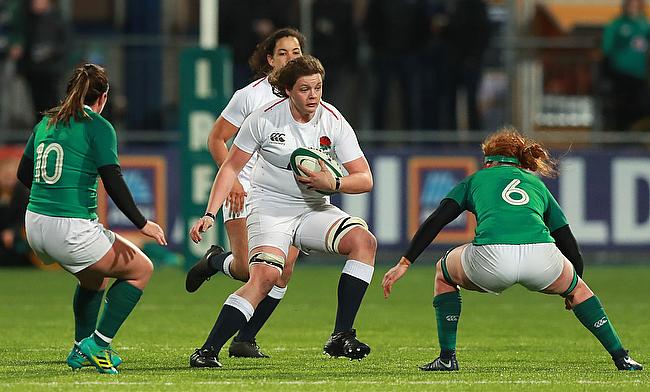 Leitch: 'I have been given loads of support and that has given me the opportunity to play for my country'
England Women to face Barbarians at Twickenham Stadium in June
England Women name 35-member Elite Player Squad
Red Roses 2019 Six Nations fixtures announced

After a week of turmoil surrounding Brexit and Theresa May’s failed attempts to agree a deal with her fellow MPs, there has not been much to smile about when discussing Europe.

However, in the case of Sarah Beckett, she has every reason to be upbeat when it comes to sport and our continent.

And her positive mood will only increase if the Red Roses can secure a Six Nations Grand Slam this weekend as they aim to become the cream of the crop in the northern hemisphere once again.

England brushed aside Ireland, France and Wales before producing a scintillating nine-try performance against the previously unbeaten Italy as they made it four wins out of four last Saturday.

Just the nine tries for England, who secured a dominant victory over Italy in the Women's Six Nations

At a blustery Exeter, England shone and Beckett was one of the standout performers as she was awarded Player of the Match in only her fifth international appearance.

“The Italians were a physical side, but we managed the game really well and really took control,” Beckett says. “The forwards, including myself, really took pride in hitting them hard to try and put them on the back foot to try and get some purchase in the game.

“We have so many talented players on the pitch and it [the Player of the Match award] did come as a shock! I can’t really put it into words what that means, but it is more important to me that the team are actually playing well. If I am doing well and the team are doing well because I am focusing on my job, that is great. It is not about personal accolades for me.”

Beckett’s eagerness to highlight the team as a whole is unsurprising. The Red Roses are making people sit up and take note, which was emphasised last weekend as a record attendance of 10,545 crammed into Sandy Park to get a glimpse of this new and exciting era for England women’s rugby.

“It was amazing”, she says. “It was like a wall of noise hitting you as you came out. You literally couldn’t hear the person next to you because it was so loud and hearing the anthem that loud was just incredible!”

Since the Rugby Football Union announced the introduction of full-time contracts in the women’s game at the beginning of 2019, England have delivered a booming statement. It is absolutely right that this talented squad is receiving praise as they aim to regain their Six Nations crown and Beckett’s rise just goes hand in hand with the vision the RFU have for the Red Roses.

Beckett has burst on to scene after making her international debut against the USA last November. The Firwood Waterloo player admits she ‘didn’t know where she stood’ at the end of last year, but the 20-year-old was named in England’s EPS Squad in January.

She has now become a regular for England during the Six Nations and the flanker also grabbed her first try in their 51-12 victory over Wales at the end of last month.

“It has been a whirlwind!” says Beckett. “I think you have just got to take everything within your stride. I am surrounded my so many great players who are helping me improve all of the time. The international pace of the game and the standards we set ourselves are so different to what I have been used to before. It just pushes you to want to be better because you are surrounded in this environment.

“It was unbelievable to pick up my first cap in the autumn and after that, I wasn’t really sure where I stood, but I then got the call about the contract. I was with my Mum. I am the sort of person who doesn’t like to celebrate too much, but when I told my Mum after the phone call, she went absolutely crazy!

“It is nice to share it with the family. They have been there throughout the whole journey to get me to here. You get to live your dream day in, day out. It is sensational.”

This was pretty special?

Another big shift from all the girls today?? pic.twitter.com/Mc913x6atS

Her fortunes don’t seem to have waivered over the last five months and that support which Beckett alludes to from her 'rugby' family has been a factor.

Her father, Mark, played for Waterloo as did her granddad and uncle. Her twin sister, Kate, is enjoying rugby at university while brother Charlie represented Gloucester and is currently with Jersey Reds in the Championship.

“It is great to have their support and obviously having a brother there to support me with things that he has learnt from his professional career is great. My Dad has been coaching me and my Mum has just been amazing as she been up and down the country giving me the best support.

“That is what I have to remember when I am here. It is not just about being here now, it is all the work that has gone into it not just from myself, but from my family and the stuff they have had to do for me so I can get here.”

The Beckett family will be once again showing their support this weekend as Sarah makes her first appearance at Twickenham, with the Grand Slam on the line against Scotland.

Whilst England have flourished in the Six Nations, Scotland have struggled. They currently sit bottom of the table having lost all four of their matches and there have been suggestions that England have the title and the Grand Slam already wrapped up.

Your #RedRoses squad to face @Scotlandteam on Saturday at Twickenham ??

Don't forget, entry to the match will be free of charge after the men's game ??

But Beckett is quick to dismiss that notion: “We haven’t really talked about what is at stake on Saturday. The realisation of a Grand Slam is there and we are all aware of it, but we know it is going to be an international Test match. No game is easy. You can’t take it as a given.

“Scotland will be physical and they will be out to upset us in terms of what we are trying to do so we can’t take it for granted. We have to play it like any other match, prepare the same and just go out there and show what we can do. Hopefully, it will be enough.”

If England are to achieve the Grand Slam on Saturday evening, it would be the perfect start to their new chapter as the Red Roses build towards the 2021 World Cup in New Zealand and Beckett is in full agreement.

“It would be great for the growth of the game. There is now that pathway for girls to pursue a career in the game which is vital. You see we are getting more exposure and it will be great to play at Twickenham on Saturday.

“We get to play after the men’s big game. Hopefully a lot of people stay after the men’s match so we can showcase the standard of where women’s rugby is at now. We want to keep that positivity to show that it is a great game to get into and women can be successful in the game.”