Gulliver: 'You can't turn down the opportunity to play in such a prestigious team' 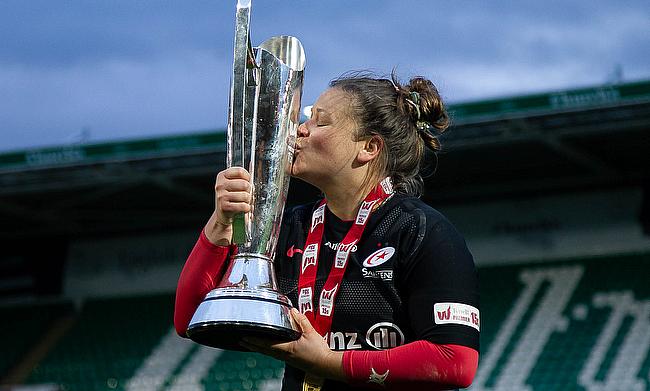 Just over one month ago Georgie Gulliver was running off the pitch of Franklin’s Gardens to a standing ovation, fighting to holdback the tears. It was to be her final game as a Saracens player. Her final game full-stop. But, when the Barbarians come calling, retirement has to wait.

“I feel so, so lucky for all the girls at Sarries for allowing me to end on that amazing game (the Tyrrells Premier 15s final) and it has been a bit of a dream come true really that I’ve been given the opportunity to play in this BaaBaa’s game as well. Everyone keeps giving me stick, saying they thought I’d retired in that game. But you can’t turn down the opportunity to play in such a prestigious team.” Gulliver said.

Not a stranger to international rugby, Gulliver has picked up 36 England caps in her career, but never thought she’d have the chance to represent the Barbarians; “You would always dream of playing in a BaaBaa’s team, but that hasn’t been a reality for women’s players until very recently. The amazing work that people like Fiona Stockley have done behind the scenes to get this team together is absolutely incredible really.”

This weekend’s clash against the Red Roses will be the second time that the Barbarians women side have come up against international competition, the first time being last month in a narrow 33-34 win over the USA in Glendale, Colorado.

Good luck to @Barbarian_FC as they take on England on Sunday - particularly our Welsh contingent: Jaz, @elsnowsill and assistant coach @bird_burgess. pic.twitter.com/0XD48zTjQ8

One of eight England internationals in the Barbarians team, Gulliver recently won the Tyrrells Premier 15s alongside several of the players that will be wearing all white early on Sunday afternoon, with the scrum-half admitting that she will be avoiding some of them.

“The likes of Poppy Cleall and Zoe Harrison were really, really big for us in the final against Quins, so it will be interesting being on the end of that. I’m probably going to try and stay away from Poppy if I can help it!” Gulliver laughed.

“It will be a really weird one actually. Obviously, there are eight England girls in this BaaBaa’s squad, so to play with a lot of my friends again, let alone playing at Twickenham, it will be weird. But a good weird, I think.”

Playing ahead of the men’s game on Sunday afternoon, England’s women playing before or after their male counterparts is not a new thing, however on this occasion, the fact that the women are playing before has been highly advertised, in stark contrast to previous years.

“I think sometimes, if we’re honest, people come into the games not realising that there is a women’s game on and they’ll say; ‘there’s another game on’, then maybe stay, have a few more beers, watch and be really impressed by the brand of rugby that they are seeing. It is great for the game and if it keeps people watching then that is fantastic as well.”

In recent years the women’s game has gone from strength to strength, with major sponsorship coming into the top division of English rugby and, in Gulliver’s opinion, raising the standard of rugby, especially in contrast to when the 33-year-old began playing.

Waking up with that winning feeling... ??

“It’s completely transformed. The Premiership has always been tough to play in, but the introduction of the Tyrrells Premier 15s last season has really professionalised the league.” Gulliver started, “It has brought in minimum standards for the game in terms of nutrition, strength and conditioning, coaching, medical and things like that. It has really raised the standard of women’s rugby across the board.”

Playing high level rugby for most of her adult life, Gulliver has been mixing rugby with her career as an anaesthetic practitioner and admits that it will be a relief to not feel like she has two full-time jobs. Hoping to start a family with husband, Ben, after a summer off, Gulliver still has one final hurrah waiting at Twickenham this Sunday.