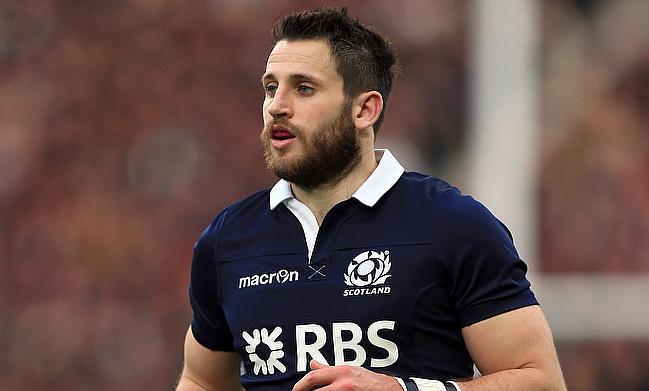 One of Scotland’s heroes from Paris in 1999 has put faith in the country’s back three to come together and perform well in France this weekend despite the loss of Stuart Hogg.

Kenny Logan, now 46, was on the wing for the Scots the last time they returned from France with a victory two decades ago.

With England losing out to Wales the next day at Wembley in the final round of games, the 36-22 away win in the Stade de France meant that Scotland won the last ever Five Nations.

Since then, the Scots have always returned back from the trip with their tail between their legs and with the injury list continuing to grow, it will be a big ask for them to gain victory this time.

Elsewhere in the team the likes of Ryan Wilson, Finn Russell and Huw Jones are missing and at full-back a big whole has been left by the influential Hogg.

In to fill Hogg’s rather large boots comes 22-year-old Blair Kinghorn and Logan feels he can link-up well with wingers Sean Maitland and Tommy Seymour.

“Blair Kinghorn is not Stuart Hogg, but he has done really well when he has come into this team,” Logan said ahead of the Guinness Six Nations round three clash.

“He can score tries as he showed against Italy while he has been flying at full-back for Edinburgh this season.

“The back three in general looks good and Sean Maitland and Tommy Seymour are experienced pros who will help Blair out.

“Sean is pretty reliable while I am a big fan of Tommy Seymour. After the Lions tour [in 2017] it took him a bit of time to get back to it, but I have a lot of time for him. He doesn’t make a lot of mistakes, is very consistent and for me he is top class.”

Scotland have been widely praised over the last couple of years for playing an expansive game, but Logan believes they have to alter their game plan at times.

“Especially away from home you can’t throw the ball about all of the time, sometimes you have to kick for the corners and build up possession and territory,” he explained.

“People think of the All Blacks as a team that just runs everything back at the opposition, but if you look at their game closely it is very structured with a lot of kicking at times.

“I think Scotland need to find this control sometimes and mix up that kicking game with their running game to break down the best defences.”

When Logan was starring in Paris 20 years ago, so was current Scotland head coach Gregor Townsend who was at stand-off.

Relive the five tries in Paris that gave Scotland victory over France in 1999.

Logan recounts: “With Gregor at 10, it was amazing because he had one of his best seasons and everything that he touched seemed to turn to gold while having centres like John Leslie and Alan Tait meant that as a back three, you were guaranteed some ball which is what we wanted.

“Gregor is a very intelligent guy and I always thought the way he read the game was something different and out on the pitch I used to always think if you can read Gregor and get on his wavelength, then we can score points here because he quite simply did things that others could not.

“By the end of that Five Nations in 1999 we had become quite close and I was reading him well and that led to some good attacking from us.

“I always knew he would make a good coach, but to get where he is now through a lot of hard work, is brilliant.

“He is a great thinker of the game and he is big into his psychology and when you are dealing with a large squad of individuals, you need to be a good man manager and I think that is where Gregor’s talents really shine through.

“There has been a lot of pressure recently with new players coming into the squad and having to get up to speed quickly, but Gregor has handled it well. I am proud of him.

“This Scotland team can beat anybody on its day, but the country have not won a trophy for 20 years.

“When you are playing you don’t think of it in those terms because you are just concentrating on what is going on, but when I look back on our achievements 20 years ago, I am pretty proud.”