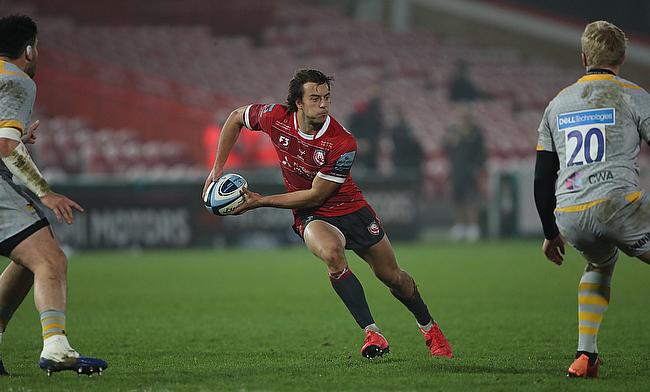 Having made his Gloucester debut seven years ago as a teenager, Lloyd Evans can now call himself the Cherry and Whites' starting fly-half.

Last week, it was announced that former England No.10 Danny Cipriani would be leaving the club with immediate effect. With the 33-year-old’s departure, Evans is now the only senior fly-half at Kingsholm.

Having been utilised heavily since George Skivington arrived from London Irish in the summer, Evans has had many opportunities to showcase his talents. As a result, the 25-year-old insists he will be focused on the task in hand rather than paying any attention to those suggesting that he isn’t up to the task of replacing the mercurial Cipriani.

“I have got that feeling of it being second nature,” Evans said. “To be honest, there is always going to be that chat surrounding Danny’s departure, but it feels like there is a bubble at the club at the moment.

“When you are in there, training every day, trying to improve every day and working really hard, both as an individual and as a squad, that kind of outside noise, you don’t really feel it to be honest. Moving forward, we have to keep doing that hard work, day to day, keep improving and the rest will take care of itself.”

A former England U20 international, Evans has bided his time before getting consistent opportunities to be part of the matchday 23 for Gloucester. A local lad in every sense of the word, as a child Evans would attend Kingsholm and he grew up in Cheltenham, where he also attended Dean Close School.

Gloucester Rugby would like to announce that Danny Cipriani has left the Club with immediate effect.

Gloucester Rugby would like to place on record our appreciation for Danny’s contribution during his time with us.

When watching the fly-half on the pitch, it is clear how much he wants to succeed in a Cherry and White jersey. When slicing a ball into touch last weekend against Ulster, Evans let out a cry of frustration at himself, but he more than made amends in the minutes that followed, helping Gloucester to a late win in front of a limited home crowd.

It was a deserved victory, a week after they had lost heavily on the road to Lyon in the opening round of the Champions Cup. Having experienced an indifferent start to the season, losing two out of their opening three Gallagher Premiership matches, Evans believes that the side’s late win over Ulster was exactly what was needed going into this next block of fixtures, starting with a trip to Exeter Chiefs.

“I think it was an important result for us, for our season, for our belief within the squad, in our game plan and our processes and what we are trying to do as a team,” Evans said. “Some really positive bits have come out of it and that is obviously going to give you confidence going into the Exeter week, who won the double last year. It is exciting. There are parts of our game we’re really excited about and what a chance to try and implement that down at Sandy Park.”

There were naturally concerns coming into this weekend about Gloucester’s trip to Devon. Having had a Covid-19 outbreak in their camp, Rob Baxter said on Wednesday afternoon that the game was definitely taking place thanks to their track and trace efforts.

That would have been welcome news for Evans and his team-mates who would not have wanted to lose momentum following their impressive victory over Ulster.

The same applies to Skivington and his coaching staff. Arriving in the West Country with Gloucester out of the running to make the top six, Evans says that it was no easy task for the new coaching group.

“I felt like that block of games particularly (to conclude the 2019/20 season), for the new coaching staff coming in, was quite tough because they were wanting to implement exactly what they want, without necessarily having the time to do it,” Evans said.

“So, it was a complete balancing act. I feel like we were getting there towards the end of that Covid block and then we had a good few weeks going into this new season where we could talk more about how we were wanting to play moving forward into this season.

“It is definitely not perfect, and it is a constant work on to try and implement our game plan every week in different fixtures. It is the start of a change in mentality in the squad and it is exciting, but we have got to keep working hard at it and improving every day to try and get to it.”

Skivington has continued to shape his squad since arriving at Kingsholm and last week, the club announced that Scotland fly-half Adam Hastings will be moving to the West County next summer.

For Evans, he knows this will be direct competition for the 10 shirt, but he admits all he can do is take the opportunities to prove himself on the field when given to him.

So far, it is a formula that isn’t going badly at all. He was the catalyst that drove Gloucester to their 40-24 win over Wasps in late November and a week later, Evans kept his side competitive against Harlequins, even if that fixture ended in a loss for his side.

The key for Gloucester is to now find some consistency in their results and Evans will be aiming to pull the strings for an exciting Cherry and Whites outfit.

“I think that (win over Wasps) shows a good squad because you have the international quality go away and when they come back in, they bring energy and the experiences from that," Evans said. "Then, you need a blend of young players who have worked really hard in training to get opportunities and a core of players who are at the club daily and pushing the club on.

“When the internationals were away and we got that good result against Wasps, Premiership finalists, it shows where we want to go as a squad, but we have got to do that consistently.”