Lewis Moody previews Round 4 of the LV=Cup 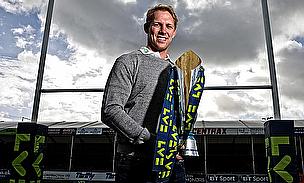 Lewis Moody may be a Leicester Tigers legend but he has backed Bath Rugby’s in-form team to get the better of them in the LV= Cup and book up an all-important home semi-final:

Pool 2 is the only one of the four yet to be decided, heading into the final round of fixtures, and it couldn’t be much tighter.

Tigers, who host Bath on Friday evening, sit level on points with Exeter Chiefs and one behind Sale, who travel to Worcester Warriors and Ospreys respectively.

Leicester were in pole position until they lost away to Harlequins last weekend and Moody believes they may be beaten again.

Bath are missing a handful of players to Stuart Lancaster’s England squad, including exciting trio George Ford, Kyle Eastmond and Anthony Watson, but Moody is not doubting their depth and relishing the opportunity to see the next generation breakthrough. Gavin Henson  was one player to put his hand up last weekend.

“I can see Bath potentially nicking that one, with the form they are showing at the minute,” he said. “They are obviously missing a reasonable proportion of their squad through England call-ups but I think one thing they have done well in the last couple of seasons is bring guys through.

“Leicester have had a tough run of games recently and their injury list is well-documented, but they would never use that as an excuse.

“Leicester always seem to be able to pull a big win out of the bag when it’s needed so I wouldn’t write Leicester off but I think Bath go into this game as favourites.”

Victory at Welford Road would guarantee Bath a home semi-final and Moody knows how valuable that is – so much so, that he is confident enough to tip Bath for the final already.

“It is massive motivation for any side, whatever competition it is,” he added. “You look at the Heineken Cup and how hard-fought those games are for the home draw and the same will be the case for the LV= Cup.

“Those semi-final home games are all-important. Bath, with the form they are in at the minute, you would be confident they would beat whoever they came up against at The Rec in a semi-final.”

As for who might capitalise on another Tigers slip-up, the former England captain is backing fellow Hall of Fame inductee Rob Baxter’s Exeter Chiefs to go from strength-to-strength at Sixways.

“I think Exeter will definitely take a win at Worcester so for me they are the most likely team to go through,” said Moody.

“Worcester are having a brutal year and they don’t seem to have performed any better during the LV= Cup.

“I think Exeter will take it – Rob Baxter has created something very special down there, a team that is hungry for silverware and Exeter are yet to grab hold of any.”

The weekend’s other standout tie is Saracens’ trip to Northampton Saints – two sides already certain of their spot in the last four.

The clash already has Moody licking his lips and with that vital home advantage to play for, he expects Saints’ years of frustration to work in their favour.

“After the year they had last year, with the Premiership final defeat, it has really hit them hard,” he added. “The style and form they have showed I think is from frustration from underachieving.

“I think for them, as with Exeter and all these sides, there is a hunger now to secure an early piece of silverware because it brings with it such huge confidence.

“I’m not saying Saracens are not hungry but I think the tenacity in the way that Northampton are playing, because of the disappointment they have had over the past few seasons, is really driving the performances they are putting in.”

Be part of the rugby family at the LV= Cup Final at Sandy Park, Exeter on March 16th. Tickets now available at www.ticketmaster.co.uk