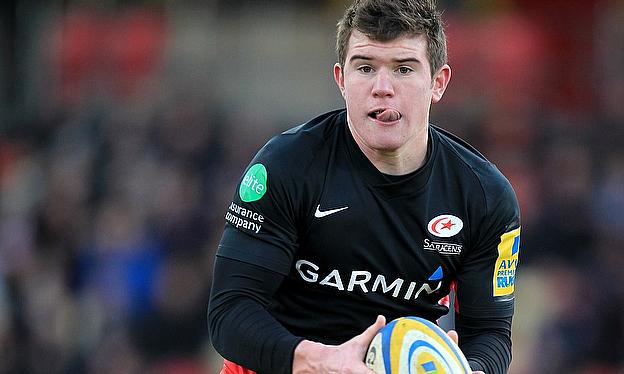 Saracens recorded a comfortable 41-8 victory over Newcastle to ensure they will finish top of pool one in the LV= Cup and progress to the semi-finals.

A home semi-final would be a bonus for Saracens and they can earn that in next week's away fixture at Northampton.

Northampton have 14 points, Saracens have 15 and the winners of their contest seem sure to have crucial home advantage.

A much weakened Saracens took a considerable amount of time to subdue a stubborn Newcastle and only led 15-8 at the interval with Ben Spencer kicking five penalties.

It was not until early in the second half that they were to pick up their first try, but two from number eight Jackson Wray put Newcastle out of contention.

Centre Tim Streather was Saracens' best player, making a number of penetrative runs and it was he who created their third try for Ben Ransom. Tom Jubb scored Saracens' bonus point try with three conversions from Spencer completing the scoring.

Newcastle battled hard throughout but ill discipline prevented them from sustaining a realistic challenge.

In wing Zach Kibirige they possess a promising talent and it was he who created the visitors' only try, with Joel Hodgson kicking their remaining three points.

Saracens made a quick start and were ahead after only four minutes when Spencer kicked a simple penalty goal.

Saracens continued to be the better side in the opening period with the visitors conceding a number of penalties in an attempt to stem the tide.

Newcastle lock Sean Tomes picked up a yellow card for offside at a ruck and from the resulting penalty, Spencer extended the lead.

When Newcastle collapsed the scrum in their own 22, Spencer was again on target to give the hosts a 9- 0 lead after only 12 minutes.

Against the run of play and with their first attack, Newcastle scored the opening try.

Tomes returned, but still his side continued to infringe with Spencer's fourth success giving Saracens a 12-5 lead at the end of the first quarter.

Newcastle became more competitive and were rewarded when Hodgson kicked an excellent long-range penalty but he crucially missed with two easier efforts.

The penalty count continued to mount allowing Spencer to kick his fifth goal with the last kick of the half to leave Saracens with a 15-8 half-time advantage.

Saracens began the second half strongly and looked certain to open their try account.

Streather carved a huge hole in the Falcons' d efence to feed Nick Tompkins. However Nick De Jager failed to collect Tompkins' scoring pass and the chance was lost.

Sustained pressure from the Saracens meant that the first try had to arrive soon and it arrived after 47 minutes when Streather made another telling burst which created a try for Wray.

Saracens maintained their momentum with Wray driving over for his second and with Spencer's conversion, the hosts were out of sight being 27-8 in front.

Streather continued to carve the Falcons' defence apart and he made another break to provide Ransom with a try.

With the final play, Jubb crashed over for the bonus point try which Spencer converted for a match tally of 21 points.