Lewis Jones is enjoying life in the Championship, but now he wants to become a regular at Ealing 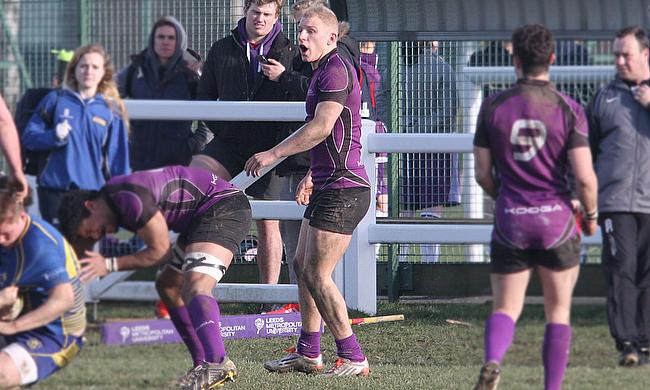 Rising star Bar Bartlett enjoying life on the south coast with the Cornish Pirates
Callum Sirker: "I didn't know if I would get another chance"
Callum Sheldon: “Every time I play for Scotland I do it for my family”
Ealing Trailfinders add student trio from Leeds Beckett University
Settling into professional rugby nicely - Rodman

Ealing Trailfinders’ Lewis Jones has his sights set on progressing further in the game as he talks to TRU about his early setbacks, university rugby and what it means to represent your country.

At the start of another week of university rugby action comes another success story from that level of the game. Over the phone, I speak to one of the many young players that have made their mark in the BUCS leagues and have gone to achieve a professional contract in the sport.

Even before his time was up at Leeds Beckett University, centre Lewis Jones had already experienced what it was like to perform on a big stage and the 21-year-old seems to be continuing to aim high after landing a deal with Championship side Ealing Trailfinders in the summer.

“I have just come out of university rugby,” said Jones. “I am not the finished article by any means and there are certainly things to work on. It’s just about nailing them down and I am at a very good club to achieve this.

“If I can do that, then the first team position will come. I just need to keep producing the performances I have shown in recent weeks.”

And it hasn’t been a bad few weeks for Jones. Ealing’s home win over Yorkshire Carnegie last Saturday in the British and Irish Cup saw Jones score his first try for the club and the former Carnegie man has every right to be pleased with how things have started down south.

On the phone, Jones comes across very modest and articulate. At the start of the interview, he is quite happy for us to cover all the bases of his short career that has experienced a rapid rise after a tough start.

Jones said that he always wanted to play rugby and at the tender age of 13, he was picked up by Northampton Saints and brought into their academy after playing locally for Dunstablians RUFC in Bedford. However, it didn’t work out for Jones so he decided to go down the university route.

For any young player with aspirations of playing the game as a career, a move to one of the most ambitious clubs in the English game would’ve been the dream move, but for Jones, it was more of a learning curve.

It was a move that Jones believed he had to take, but admits not making the grade in the five years he was at Franklin Gardens has enabled him to build his way up to where he is now.

“I was playing locally and I moved to Saints with a couple of my pals such as Reece Marshall, who is still at the club now,” he said. “This really was my first real involvement with rugby union and prior to that, I did play a little bit for Harlequins RL - (now known as the London Broncos).

“Ultimately, the decision wasn’t mine to stay at Saints. Other players were brought in above me.

“Harry Mallinder was one of those players and when you have got him playing in your position, maybe it wasn’t a bad outcome for me to leave Saints!

“Not staying with the club when I hit 18 years-old is probably the best decision that has impacted by rugby career. Being able to step away from that Northampton academy route and find a different way into the game such as university rugby has helped me massively and I owe a lot to that.”

The Hemel Hempstead-native decided the next step in his career would be 175 miles north. Jones moved to Leeds Beckett in 2013 to study marketing, but whilst obtaining a degree in Yorkshire, he was also able to add another string to his bow.

That came in sport and on the field with Leeds Beckett’s 1st XV where Jones enjoyed great success. “We had such a strong side. We had the likes of Matt Beesley who is now at Northampton and Will Cargill who is down at the Cornish Pirates playing for us. I spent three years playing rugby at Leeds Beckett and I think, especially in the last two years, everyone hit top form and it culminated in us having a great squad.”

Beckett went on to win the BUCS Championship Trophy in 2015 and last year got even better for Jones as he was named in the England Students squad for games against Portugal, France and Wales and he was also brought into the Yorkshire Carnegie set-up.

He added: “Playing for Leeds Beckett was great because we also knew if we impressed, then we could be involved with Carnegie.

“In terms of England, it was such a surreal experience and one I am very proud of. We had a really close knit group and it is the closest thing in student rugby that can replicate a professional environment. Added to that, you still get the student culture too. The socialising after games is compulsory so you get the best of both worlds.”

Jones was also involved with the Students this year against France and Ireland alongside fellow Beckett team-mates Liam Edwards and Luke Peters before all three graduated from university in the summer.

Jones’ affiliation with Edwards and Peters continued soon after they departed Leeds as the trio now find themselves together at Ealing. They’ve followed the same path as Sam Rodman – another player to come off the Leeds Beckett production line - and Jones feels that the Beckett aspect was a factor that helped him decide to move to the Trailfinders.

“Playing at university is a great stepping stone to get into the Championship,” said Jones. “I chose to join this club because of the brand of expansive rugby they play and I thought I would be an ideal fit for that.

“I think playing with the lads at uni did probably help with the decision to move here as well. Luke and I are very close friends and we did speak about it off the pitch and we decided that this could be a good place for us to take that next step in our careers.”

Jones may well have celebrated on Saturday night with centre partner Peters after Ealing’s third straight win in all competitions, but he is keen to stress there is still work to be done.

For now, his short term aims are focused on cementing a place in the first team and if he continues with this mentality, there are certainly more positive days to come in the career of Lewis Jones.