Callum Sheldon: “Every time I play for Scotland I do it for my family” 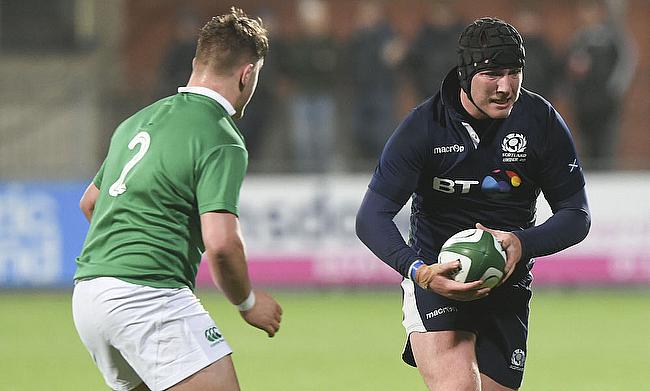 Niall Saunders: Following in my Dad's footsteps
Simon Uzowke: A breakthrough year
Dan Grange: ‘I now love the sport which I once hated’

Scotland U20's Callum Sheldon talks to TRU about the reason behind choosing to play for Scotland, the big decisions he has already had to make and university life at Leeds Beckett.

It was for afternoons like the one against Australia at the start of June why Callum Sheldon chose to play for Scotland, although when it comes to huge decisions, this is an emerging talent who has already made bigger choices before the age of 21 then most do in their entire life.

That 15-10 victory over the Wallabies in the World Rugby U20 Championships in Manchester would’ve been one of Sheldon’s most satisfying moments since making his debut for the U20s last year. Sheldon did not feature against Australia, but it is results like that one which the 20 year-old knows would’ve made his family and especially his grandad proud.

Raised in Lancaster, Sheldon knew that there would come a time where he had to make a choice of whether he would play for England or Scotland. “Well, my Dad is English, but my Mum’s half of the family are very proud to be Scottish,” says Sheldon. “I remember the debate being discussed around the dinner table when I was a lot younger. I used to just keep my head down a try not get involved!”

However, when the time came to make a decision as to which direction his rugby career would go in, he made his choice following a personal loss.

“My grandad was ill and sadly passed away before I made by choice, but because he was so patriotic to be Scottish, I just wanted to do it for him and of course my family so that is why I chose Scotland. I think abou my family every time I play.”

When we speak over the phone, it is easy to forgot that Sheldon is only 20 despite having played for Scotland under-20s and previously he has been on the books at Newcastle Falcons and Edinburgh. He seems confident in his own ability, mature beyond his years and has been sure of what he has wanted ever since he first picked up a rugby ball as a kid.

His decision to play rugby has of course seen Sheldon reap the rewards, but was it all plain sailing for the now prop forward? Most youngsters get involved in a sport because they enjoy it, but for Sheldon that wasn’t the case to begin with. “I wasn’t a very good player when I began playing rugby aged 11” Sheldon says, “I only started playing the game because my friends played it. I was pretty awful!”

Sheldon admits he began to ‘bulk up’ as the years passed by during his time at Queen Elizabeth School, Kirby Lonsdale and Kirby Lonsdale 1st XV. He says that he of course now enjoys the sport and says his friends played a massive part in that. Sheldon went on to be selected at county level before he was connected with the Newcastle Falcons at under-15 level.

“It was quite overwhelming when I first joined. Falcons are a big club in a big sporting city and because I came from a school that wasn’t very sporty, I was like ‘wow.’ It was difficult at first for both myself and my family.

“They used to drive me from Lancaster as a young kid all the way to Newcastle on a Tuesday and a Thursday for training. Overall, it was about a four-hour commute so I owe a lot to my parents for allowing me to grasp the opportunities I had. Been in that set-up at a young age was a great learning curve for me to understand what it was like to be in a professional environment and whether or not I wanted to be a professional player.”

Sheldon was in the North-East up until two years before his career path took a different turn. The under-18s Falcons side played Scotland under-17s in a trial game where the Scotland coaches took a shine to Sheldon and asked whether he wanted to pledge his allegiance across the border.

After his big decision was made, Sheldon was brought into the Scottish Exile programme before joining up with Edinburgh Rugby as a BT Sport academy player. “Scotland knew about my family and asked if I wanted to play for them. They focused on me and put a lot of time in with me and that helped me grow into the player I am today.

“I made my debut for the under-20s against New Zealand last summer which was such a great experience. Before that, I was named as one of the under-17 players invited to Spain for a training camp before being selected for the national under-18 side two seasons ago.

“The recent World Championships show that we have got a team capable of getting some strong results as shown against Australia and Italy and for me, I have enjoyed every part of representing Scotland so far.”

But following the U20 World Championships last year, Sheldon decided that he wanted to move back down south and focus on a different kind of career; University. In September 2015, he went to Leeds Beckett University to study Sports Coaching however is involvement and desire to make it in the world of rugby is still stronger than ever.

Leeds Beckett is one of the top universities for rugby and is also affiliated with Yorkshire Carnegie. Sheldon has not spent time resting on his laurels and has already had an experience in the Yorkshire set-up. “Leeds Beckett is a great place to play rugby. I didn’t expect university rugby to be of such a high standard and the same with the coaching methods. It is very professionally driven and it is like being in a professional team. Everything is well organised and all the lads are great in the side.

“They are linked with Yorkshire Carnegie and I managed to make my debut for them against Muster A in the British and Irish Cup in November last year. I am just hoping I can now make more of an impression on them and the university side and hopefully there could be a contract at the end of it!”

Having such an impressive CV at just 20, you wouldn’t bet against Sheldon securing that deal he is aiming for and making his family even prouder as he looks to take another forward step in the professional game.