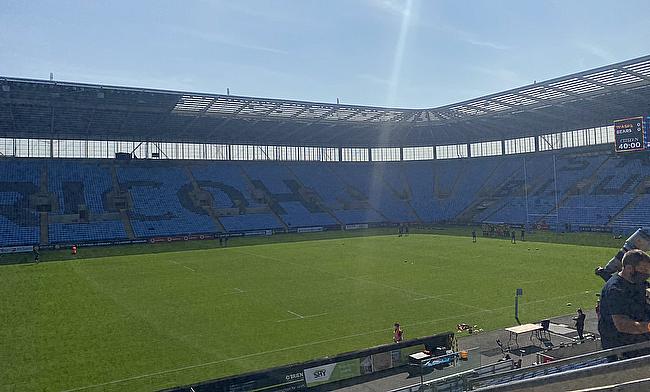 On his Zoom press conference call on Wednesday ahead of arguably Exeter Chiefs’ biggest game in their history, Director of Rugby Rob Baxter addressed the recent events of the last 48 hours.

Earlier this week, the government announced their decision to push the pause button on allowing spectators to return to stadiums and with this regulation potentially lasting for six months, it has painted an increasingly bleak picture for rugby union.

The Chiefs face Toulouse in their Heineken Champions Cup semi-final on Saturday behind closed doors, but their next Gallagher Premiership fixture against London Irish on September 30th was set to be one of the latest pilot games to take place.

But Exeter’s plans to welcome 1,000 supporters back to Sandy Park has been put on hold following the announcements made by Michael Gove and Boris Johnson, leaving the sport in a precarious position.

In an alarming statement released on Tuesday evening, RFU CEO Bill Sweeney admitted they now need government intervention to avoid the sport going to the wall due to Covid-19 and Baxter understands the wider implications the coronavirus crisis could have on the future of the game.

“It doesn’t take a genius to have these concerns,” Baxter said. “There is a reality that this cannot go on if we genuinely, as a country, want sports and sporting venues to be able to continue and provide what they do to their communities.

“Outside of professional sport, a lot of sports clubs just provide a community service and that is just going to disappear. You can’t run businesses on zero finance which is what is happening right through the sport. Let’s hope it is a genuine concern taken by the government in how they aim to help us, but also, how they aim to get crowds back in as soon as they possibly can.”

On the pitch, Exeter’s hopes for this season are still burning bright. With a European semi-final to come this weekend before the Premiership play-offs, the potential of a double-winning season for the Chiefs is still alive.

And several of Baxter’s squad have experienced the different levels of the English rugby pyramid to get to this stage.

The likes of Jack Nowell, Joe Simmonds, Tom O’Flaherty and Luke Cowan-Dickie have, in the past, all plied their trade away from Sandy Park in order to develop themselves as players and the community game is still an extremely important part of Exeter’s vision.

There is a growing fear that the grassroots game will continue to be hit hard by the RFU’s financial situation and the lack of crowds in stadiums could have severe consequences for the sport.

According to a report by Oakwell Sports Advisory, Premiership clubs could lose a combined total of approximately £67.2 million of match-related revenue if no supporters are allowed into games for the 2020-21 campaign.

“Rugby thrives on rugby,” added Baxter. “We, in particular, take a great deal of pride in what our relationships with local clubs are like and how we foster them. We 100 per cent don’t want to think of the local clubs suffering.

“This is the big thing in Exeter which a lot of people don’t understand. There is way more Exeter academy players playing for local rugby teams than there are playing for Exeter. That’s how the numbers game works.

“We genuinely feel that we can give young players pathways. If they can’t make it through into the professional rugby environment, we can help them go into a work environment so they are well qualified and well set for life outside of rugby, but they can also maintain their enjoyment of the sport.

“Sporting biographies for the last 100 years, in all different sports, are based around people who always say they would be lost to society if they hadn’t found sport. It is huge part of the country’s culture which we can’t just let slip by without taking some positive action about it.”

Worcester Warriors share the same feeling as Exeter when it comes to the value of the community game. TRU’s Joe Harvey has spoken to Director of Rugby Alan Solomons on several occasions about the club’s links with the National Leagues.

Their top eight hopes look to be over, but the feeling is @WorcsWarriors are building something exciting at Sixways.

Ahead of their #GallagherPrem clash with Bristol, @joeharvey34 caught up with Alan Solomons and @beef324.

Players such as Will Butler, Alex Hearle and Isaac Miller have all benefitted from time spent in National One or National Two and whilst it seems like the lower leagues are trapped in an impossible position, Solomons hopes they can get back up and running as soon as it is feasibly possible.

“Everybody in this pandemic across the board has suffered,” Solomons said. “Sport, in particular, has suffered. No-one has been exempt from it. As far as the Championship and the National Leagues are concerned, it is tough and one just hopes arrangements can be put in place to get things operating again as soon as possible.

“I would like community rugby to get going as soon as possible, but with this pandemic, we have just got to work within the constraints they are outlining.

“It could be six months [without crowds]. It is a fluid situation, but obviously it is tough for everybody. A lot of this is now beyond our control. No-one anticipated this happening and obviously, the sporting bodies seem to have come together and approached the government and we have just got to wait and see what happens and how this thing unfolds.”

Worcester owners Colin Goldring and Jason Whittingham also released a statement on Wednesday to express their concerns: “Without revenue generated on matchdays from crowds, sponsors and their associated spend, Warriors and all professional sports clubs cannot hope to be sustainable without significant support.

“Playing matches behind closed doors for another six months is clearly not sustainable for this club nor for the Premiership as a whole. The additional loss of our events business puts further pressure on our chances for financial survival.”

Sale Sharks owner Simon Orange has also called on the powers outside of rugby to offer a helping hand in order to keep the game and English club rugby afloat: “Unless rugby gets government support then many clubs will go bust across all leagues including the Premiership.”

It is a view shared by Wasps CEO Stephen Vaughan who told The Guardian that clubs are united in a response to the situation. He hopes ‘a vital income stream isn’t cut off for months on end’ with the 2020/21 Gallagher Premiership campaign set to begin just four weeks after the conclusion of this season.

Similarly to Exeter, Wasps’ squad is stacked with talent who have tasted the lower levels of the game with Tom Cruse, Tommy Taylor and Jacob Umaga all being prime examples.

Head coach Lee Blackett also values the divisions below the Premiership having spent time with Rotherham Titans in the Championship before moving to the Ricoh Arena and the Wasps boss hopes the people above him in the game can find a solution to the current crisis which English rugby faces.

“Something I have learnt through my career and the things that I did early on, you can’t worry about things you can’t control unfortunately,” Blackett said. “I can’t control that [the lack of crowds in stadiums] and we as a team can’t control it.

“It is what it is and they have to figure out what is next. Everyone has the ideal plans, but what can we do now? There are people within the RFU discussing that and they will look into that. Stephen Vaughan will sort all of that from our end and for me, it is about worrying about us trying to beat Harlequins on Monday.”

Whilst Wasps, like Worcester and Exeter, continue to prepare for the conclusion of this season, the harsh reality for so many teams across the country is this: How do they survive without fans for potentially six months? The answer could be severe for the future of English club rugby.