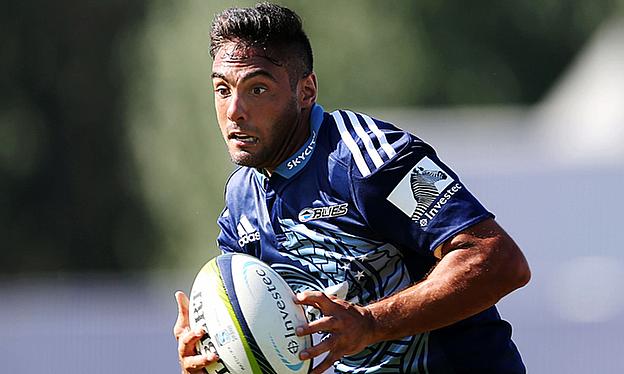 Substitute Ihaia West kicked a late penalty at Eden Park to end the Blues' seven-match Super Rugby losing run with a 16-14 victory over the Brumbies.

West struck three minutes from time and though the Brumbies still had a chance to win, scrum-half Nic White's long-range penalty attempt with the last kick of the game drifted wide.

The Auckland-based Blues looked in control at half-time, when they led 13-0 after former London Irish and Leicester back Dan Bowden scored all their points through a try, the conversion and two penalties.

But the Brumbies staged an impressive response, with substitute Lausii Taliauli scoring a try and Australia Test centre Christian Leali'ifano booting three penalties to edge them one point ahead before West's match-winner from near the touchline.

The Blues showed four switches for their latest Super Rugby game, which included starts for hooker James Parsons and lock Patrick Tuipulotu, but the Brumbies were unchanged following a 20-3 victory over the Cheetahs in Canberra last time out.

Bowden booted the Blues into a fourth-minute lead and although a second penalty attempt hit the post, he then found his range from long distance to make it 6-0 after 17 minutes.

The Brumbies struggled to find any attacking fluency and their defence was unlocked six minutes before half-time when Bowden finished off a crisp move.

Prop Ofa Tu'ungafasi and flanker Brendon O'Connor both ran strongly to set up a strong attacking position before Bowden darted over on an angled run, beating Henry Speight's challenge in the process.

Bowden added the conversion, giving his team a comfortable advantage and leaving the Brumbies with a mountain to climb.

Leali'ifano, though, got the Brumbies moving with his opening penalty after the Blues' defence drifted offside, then Taliauli touched down to round off a sustained passage of attacking play before Leali'ifano added another penalty.

It set up a tense finale and the Brumbies looked to have done enough when Leali'ifano completed his penalty hat-trick, but West had other ideas and the Blues could finally celebrate a win.