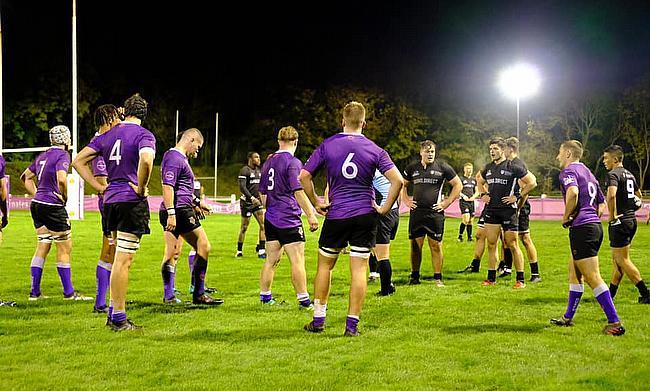 Charlie Venables - Juggling a Masters, Super Rugby and playing in the Championship
Durham extend lead at the top as Exeter move second
Durham beat Leeds Beckett to stay top
University of Bath’s Aaron James - 'It's great to be part of a pretty good story'

Alex Keay has admitted the hunger expressed by his Durham players to build on their successful BUCS Super Rugby domestic campaign can fuel a run to the Championship final.

The Palatinate clinched their first BUCS Super Rugby title last month following a 24-14 win over Leeds Beckett and the North-East side are now targeting the league and cup double.

Keay revealed he was interested to see how his charges would react after such am excellent season, but Durham’s Head of Rugby was impressed by the attitude of his players following their celebrations.

Keay said: “Winning the league I think was hugely deserved by the boys. I think they have put such a stint in this year and they have massively been a ‘together’ group so they deserve everything they have got.

“To be honest, I think we were a little concerned because we all know it is a long shift when you win the league and it was about whether we had the appetite to do it for another ‘short championship’ in the knockout stages.

“It was always going to be interesting to see how the players would react, but it was actually the boys who came to us. They had a pretty big celebration after winning the league, but we sat down and they said we really want to have a go for this.

“I was obviously delighted because that’s then them making that statement and not me and the other coaches if that makes sense!”

The new league champions did end the term with a 20-12 defeat against current BUCS Super Rugby Championship holders Hartpury, but Durham did field a much-changed side on Wednesday evening.

A number of players from their 2nd XV, including try scorer Jacob Lineen, featured for the Palatinate and Keay was delighted with the application of his side and revealed the positive impact it can have on the wider rugby programme at Durham.

Keay added: “I think they [the players] have actually shown and sent a message to us as coaches to say ‘I have put my hand up here!’

“They are not an extension of the squad because we are all part of the same squad. They put in an incredible shift against Hartpury. When you look at the team, we left 14 of the starting group that played against Leeds Beckett at home so given the quality of Hartpury’s team and everything else, I thought it was an amazing effort.

“It was a great opportunity for them and that was the way you have to approach these things. It wasn’t a case of those lads going down there to just see our season out. It was more of a case of saying, ‘Here is an opportunity, what have you got?!’”

Durham now have just under two weeks to prepare for their BUCS Super Rugby Championship quarter-final against the University of Bath.

Last season, Durham lost 64-29 to the West Country side at this stage of the competition but a lot has changed since then.

Bath ended this campaign in eighth place following just four wins all term and they enter the knockout stages on the back of successive defeats against Hartpury and Leeds Beckett, respectively.

“We want to now do the best we can do,” added Keay. “That has been the message all year. If that is good enough, then that will win us something but if it’s not, then we can’t do any more than we have done.”

Their blistering post-Christmas form allowed Keay’s charges to keep the University of Exeter at bay, with the second-placed side concluding the BUCS Super Rugby domestic campaign with a battling 20-17 win over Cardiff University.

Tries from Luke Bury, Charlie Davies and Francesco Scardamaglia earned the Green and Whites a hard-fought victory in Wales and Exeter now head into their BUCS Super Rugby quarter-final tie with Swansea University on the back of four straight wins.

As for Cardiff, their valiant display did earn them a losing bonus-point but the Welsh outfit’s season is over after finishing in ninth place.

Leeds Beckett University will enter the last eight after ending the term with a 31-21 win over Bath. Kerry Wood’s side responded to scores from Elliot Berryman and George Worboys to lead at the break, with Beckett’s points coming via a penalty try as well as efforts from Conrad Cade and Nick Brown.

An ever-present in the @LeedsBeckettRFC side for four seasons now, @CharlieeVeg spoke to TRU about doing a masters, objectives for this season and playing in the Championship for @carnegierugby.

The visitors stretched their advantage through Will Lewin whilst Caley Gray’s try was merely a consolation for Bath, who are now preparing to face Durham in the quarter-finals.

In terms of Leeds Beckett, they could face Loughborough (6th) in two weeks time because the Midlands club do still have to play their final domestic fixture against Swansea after their match was postponed on Wednesday.

With that in mind, current BUCS Super Rugby championship holders Hartpury are currently in fifth place and could play Cardiff Met in their last eight tie. The Gloucestershire outfit will travel to Wales if Loughborough fail to pick up a bonus-point win from their game in hand.

As for Met, they wrapped up their domestic term with a 64-19 win over Northumbria University. Danny Milton’s side will head into the knockout stages in a confident frame of mind having won eight of their last nine games.

For Northumbria, they will now drop into the BUCS Super Rugby play-offs and they will face either Nottingham Trent University or the University of Bristol on April 8th to stay in the top flight.

The Women’s Championship begun last week and the University of Edinburgh, Northumbria University, Cardiff Met University and Hartpury University are all through to next week’s semi-finals.

Domestic champions Edinburgh will face Northumbria, who beat last year’s finalist Durham 33-10 whilst Cardiff Met take on Hartpury after the Gloucestershire outfit dumped current holders the University of Exeter out of the competition.

Also in regards to Exeter, they have been relegated from the National league after losing 45-21 to Loughborough University in the play-off on Wednesday.

Following their 19-19 draw at the end of January with rivals Manchester Met, the Yorkshire outfit beat the University of Sheffield 22-12 and combined with MMU’s 20-19 loss to city rivals the University of Manchester, it meant Beckett were confirmed as the league winners.

Immensely proud of the boys shift today and to quote Maximus Decimus Meridius “strength & honour” ???????? was shown with a large dose of skill.

That’s two Championships Clubs academies beaten in as many weeks ????????

Whilst MMU did miss out on top spot, they are once again enjoying a cup run as they advanced into the BUCS Trophy final on Wednesday. After losing 20-13 to Hartpury 2nds last year, this time around, Rob Jones’ side negotiated their semi-final tie with minimal fuss as they dispatched Brunel University 31-17 at Platt Lane.

The North-West side will now play Men’s Premier 2 – South leaders Hartpury 3rds at the end of the month in Nottingham and the Gloucestershire outfit could well be gunning for a league and cup double by the time the final comes around.

Hartpury beat Leeds Beckett 2nds 20-18 in their semi-final clash whilst on the domestic front, they sit one point clear at the summit of their division with one game left to play. Hartpury face Reading University next week and they only need to match Exeter’s 3rds result to be crowned champions.