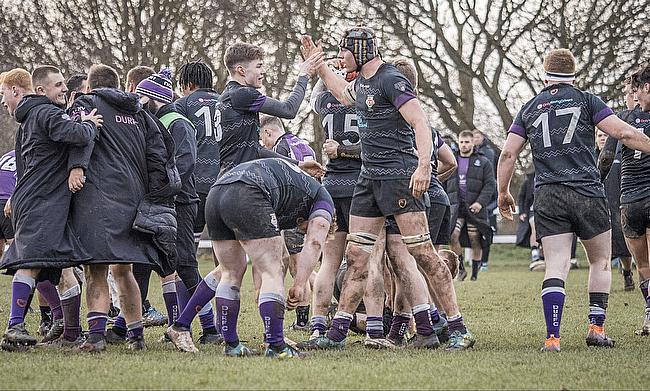 It looked as though Alex Keay’s men were going to swap places with Beckett at the summit, but a dramatic finish in Yorkshire helped the Palatinate to their 12th victory of the campaign.

The University of Exeter’s defence of their domestic crown is all but over after they were beaten by Cardiff Met on Wednesday night, whilst Loughborough University moved up to fifth spot following a thrilling win over BUCS Super Rugby holders Hartpury.

Elsewhere, Swansea University stopped the rot against South Wales rivals Cardiff University whilst the University of Bath took a step away from the relegation spot after a thirlling win over Northumbria University.

Below is a full review from BUCS Super Rugby plus we reflect on Edinburgh’s title success in the Women’s National League. Also this week, we round-up the latest news from our selection divisions as well as the BUCS Trophy.

Alex Keay’s side concluded 2019 with a 32-8 defeat against current domestic champions the University of Exeter, but since then, the Palatinate have beaten Cardiff University 32-0 before edging past second-placed Beckett on Wednesday.

The North-East outfit led 12-10 at half-time but on 53 minutes, Beckett moved in front as Steff James landed his second penalty of the afternoon to add to Charlie Dixon’s opening try.

Spain’s Toby Francis then looked to have put the hosts in a commanding position when he scooted over in the corner, but with one-minute remaining, Durham were awarded a penalty try to snatch the victory in Yorkshire.

It is now two defeats on the spin for Beckett, after losing 24-11 to BUCS Super Rugby holders Hartpury at the of January.

The University of Exeter remain in third place, but their defence of their league title looks to be over after Keith Fleming’s side lost 20-10 to Cardiff Met.

After three penalties from Met’s Harry Johnston and one from Exeter’s Harry Bazalgette, the home side were able to increase their advantage when Max Cunnington’s weaving run was finished off by Bingo Ivanisevic.

George Strainge brought the visitors back into the game just before the hour, but despite Exeter’s best efforts, they were to be denied their bonus-point in Wales as Johnston nudged over two penalties in the final five minutes to secure an excellent win for the Archers.

In terms of Danny Milton’s side, they have now won three consecutive matches - which include victories over the University of Bath and Northumbria University – and Met are just two points behind third-placed Exeter.

Loughborough University were able to climb the table on the first Wednesday of February after a superb 25-24 win over Hartpury.

Rhys Edwards’ side led 19-17 after a pulsating first half, with Loughborough’s James Gallagher scoring the pick of the tries.

A penalty from Owen Waters increased Boro’s lead after the interval and the home side then had to stay strong in defence as Hartpury threatened to work their way back into the contest.

Loughborough are the only movers after this Wednesday's #BUCSSuperRugby fixtures

Here's where things stand with 4 games to go!

However, Loughborough’s endeavour was rewarded as Waters slotted the winning points with three minutes remaining, despite a late score from the visitors.

Following their victory over Bath at the end of last month, Loughborough are now up to fifth in the standings whilst Hartpury’s inconsistencies continue.

Swansea University were able to end a run of six straight defeats and did so in the best manner possible by clinching a 20-19 victory over rivals Cardiff University at Cardiff Arms Park.

After losing to Exeter to begin 2020, Hugh Gustafson’s side had to come from behind to stop their slide in BUCS Super Rugby. Cardiff began strongly with Greg Ramage dotting down, but the Swans were able to level the scores at 10-10 by the interval.

Swansea added another try to their tally at the beginning of the second period, but there was an instant reply from the tee by Cardiff. The visitors kicked their own penalty to stretch their lead, but two more efforts from Cardiff fly-half Ed Dunford cut the deficit to a single point.

However, the home side couldn’t complete the turnaround as Swansea held on for a vital victory whilst defeat for Cardiff leaves them one point clear of last place Northumbria.

In the first half, Aaron James' side took advantage of two yellow cards shown to their hosts and raced into a 31-7 half-time lead, with Harry Laidler dotting down for Northumbria.

However, the North-East outfit stormed back after half-time as tries from Ollie Smith, Ned Newman and Jasper McGuire reignited the contest.

But, a sixth score for Bath, plus a penalty, ultimatley sealed the contest whilst Mike Hoty's effort made sure Northumbria clinched two bonus-points, which now leaves them on the tails of Cardiff.

Claire Cruikshank’s side were crowned champions after a commanding 33-20 win over the University of Exeter in their first game back after the Christmas break.

A small amount of shine was taken off their season as they ended the domestic term with a defeat against Hartpury before losing to Northumbria at Kingston Park, but the Scottish outfit won’t mind too much with the championship already sewn up.

Premier 1 – North leaders Nottingham Trent University bounced back from their defeat against title rivals Newcastle University in scintillating fashion as they hammered the University of Edinburgh 83-0.

The Midlands club are now three points clear of Newcastle with two games in the season remaining after the North-East outfit built on their 19-15 win over Trent by beating the University of Leeds 26-22 on Wednesday. The last two weeks has seen Darren Fearn’s men produce the perfect response after beginning 2020 with a narrow defeat against the University of Birmingham (3rd).

Sticking with the third-placed club, Birmingham can no longer clinch the Premier 1 – North title despite successive wins over Edinburgh (14-0) and Loughborough 2nds (41-31) because they sit seven points behind Nottingham Trent and they only have one game to go in their domestic season.

The University of Nottingham currently occupy fourth spot after recent victories over Edinburgh and Durham 2nds, but a 31-24 loss to Loughborough 2nds ended their faint hopes of launching a late promotion bid.

Down at the wrong end of the division, Leeds sit four points clear of bottom of the table Edinburgh, but the Yorkshire side do have two games in hand to come over the next few weeks.

Meanwhile, just one win since the turn of the year leaves Loughborough 2nds three points above the drop with one game left in their campaign, but that comes against table toppers Nottingham Trent whilst rivals Edinburgh host the aforementioned Leeds next week.

Over to the south section and the league title was won at the end of January by Hartpury 2nds. The Gloucestershire outfit defeated Cardiff Met 2nds 25-19 before securing top spot by beating Cardiff 2nds 47-12.

The turning point for Hartpury came before the Christmas break when they triumphed over old foes Exeter 2nds and despite the Devonshire outfit’s best efforts, they couldn’t conclude the campaign in pole position.

However, with both Hartpury and Exeter having 1st XV’s in BUCS Super Rugby, it means the University of Bristol will compete in the play-offs for a spot in the top tier even though they have finished in third place.

Their sole victory of 2020 against Cardiff Met 2nds was enough to secure third spot despite losing 35-24 to Hartpury on Wednesday.

Down at the bottom, Bath 2nds sit five points from safety and they know they must pick up a bonus-point win over rivals Cardiff Met 2nds next week to stand any chance of avoiding the drop. Bath did beat the Archers 28-7 at the end of last year so another Blue and Gold triumph isn’t out of the question.

Leeds Beckett 2nds are leading the way in Premier 2 – North following an unbeaten start to this calendar year.

The Yorkshire outfit beat the University of Glasgow 45-7 before drawing 19-19 with title rivals Manchester Met at the end of January.

In terms of MMU, Rob Jones’ side are now three points behind Beckett, having played a game more, but they are keeping the pressure on Beckett due to the fact they haven’t lost a league fixture since November.

The University of Sheffield are still in the promotion conversation as the side from the Steel City have only played seven of their 12 matches this term. They are yet to resume their Premier 2 – North campaign following the Christmas period, but they did advance into the quarter-finals of the BUCS Trophy this week after beating Glasgow 22-15.

Sheffield will play league rivals Manchester Met in the last eight whilst table toppers Leeds Beckett 2nds face the University of Strathclyde after a walkover result against the University of Warwick. Meanwhile, the highly regarded Brunel University take on Bath 3rds in two weeks’ time

Premier 2 – South leaders Hartpury 3rds are also through to the quarter-finals following a comprehensive 58-19 triumph over the University of Surrey.

On the domestic front, the table toppers one point clear at the summit after three straight wins over seconded place Exeter 3rds as well as the University of Portsmouth and Reading University

Staying with Reading, they are in pole position to qualify for the Premier 1 play-offs because Hartpury and Exeter occupy the top two spots in the division. The Knights are three points clear of nearest challengers Portsmouth, but whilst the south-coast side have played 10 of their allotted 12 games, Reading have only completed eight of their fixtures thus far.