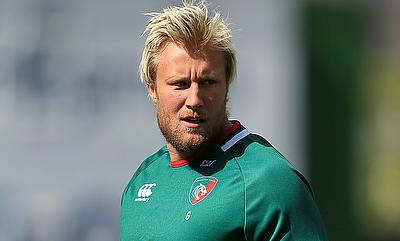 England international Jordan Crane has signed a three-year deal with Bristol and will make a switch from Leicester this summer.

Crane, who made his England debut in 2008 and has three Test caps to his name, had joined Leicester in 2006 and has been a part of Premiership winning squad four times.

In his 154 appearances for the Tigers, the 29-year-old has scored 100 points which includes 20 tries and has featured in the winning team 97 times.

Apart from his association with Leicester, Crane has also represented Yorkshire Carnegie in 17 games during 2005-06.

Bristol rugby director Andy Robinson confirmed the news on Crane's signing and revealed the former England Saxons captain can be a perfect acquisition for his club.

"Jordan is an excellent acquisition for Bristol Rugby and a natural leader.

"At 29 years old, he is at the peak of his career and we are looking forward to welcoming him to Ashton Gate.

"Jordan knows what is required to be successful at the highest level. He is a physical ball-carrier with a good understanding of the game."

Crane, who has also captained England at U18s, U19s, U21s apart from the Saxons level said he is looking forward being part of Bristol.

He also thanked everyone at Leicester and stated it was a proud moment to be part of the Premiership side in the last 10 years.

"I went to Colston's School in Bristol so to go back to where it all really started in rugby is exciting. Next season I will have a new challenge and I'm looking forward to it.

"I've had an incredible 10 years at Leicester and those experiences have shaped my career. I'd like to thank everybody at Tigers for their support.

"I have enjoyed every single moment of it as a player here. Most players will go through their whole career without getting to a Premiership Final, or winning one, but I'm very proud to win four as a Leicester player and play in so many big games over the last 10 years.

"You cannot spend 10 years in a place without getting emotionally involved in it and a lot of us have grown up together at the club so it will be tough to move on, but that is professional sport.”

Bristol will have an opportunity to qualify for the next season of the Aviva Premiership, if they manage to beat Doncaster Knights in a two-legged final which will be played on 18th and 25th May.