Joe Marchant to play for Blues on six-month loan 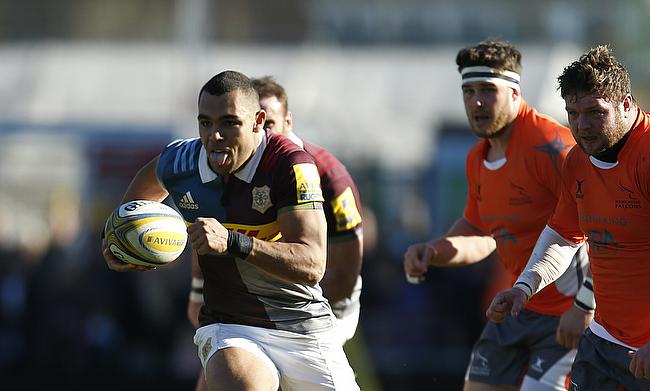 Joe Marchant (left) has been playing for Harlequins in 2014
©PA

England international Joe Marchant will be featuring for Super Rugby club Auckland Blues for six months next year after triggering the sabbatical clause in his Harlequins contract.

The 23-year-old, who recently signed a contract extension with Harlequins had a clause to help him feature in Super Rugby in order to get an exposure outside the Premiership.

He will join Blues now from 1st January next year until end of June before returning back to the Twickenham Stoop after a mutual understanding between Harlequins and New Zealand Rugby.

“Firstly I could not be more grateful to Harlequins for allowing me this opportunity to expand and grow my game," he told the official website of the club.

"The Club has supported me every step of the way in my career to date and proven that Harlequins is still willing to support my growth as an individual.

“I love Harlequins, so I am delighted to have signed a three-year contract extension which was a primary concern for me. I am exceptionally thankful to Gussy and the management for helping give me the chance to test myself in a league I have always wanted to play in whilst I am in my prime.

“I am really excited to be given the chance to experience playing in Super Rugby. I am sure that I will learn a lot and I can’t wait to bring my learnings back to the Club.”

Meanwhile, Harlequins' head of rugby Paul Gustard is confident that the experience of playing for Blues in Super Rugby will greatly benefit Marchant.

“We pride ourselves at the club at treating people as individuals and helping them be the best version of themselves. Joe has had a long-standing ambition to play Super Rugby and with our strong connection with NZR we are pleased we can help facilitate this ambition.

“It is not common practice for this to occur, of which we accept, but we are not a normal club and we must have both Joe’s and the club’s interests at heart.

"I believe his genuine desire to play Super Rugby was so great we wanted to make sure he had this opportunity whilst he has also extended his contract with us, the club he loves and is hugely loved and respected at.

“I believe he has the potential to be the best 13 in England and this opportunity he has will further strengthen his resolve to maximise his talents, returning with increased motivation to play his best rugby for Harlequins and earn the national shirt.

“Whilst we will miss Joe, who is a first and foremost a great guy to have around, we have depth in our squad at outside centre which has helped to make this possible. We have Michele Campagnaro, James Lang, Luke Northmore, Aaron Morris and Cadan Murley who all are very talented players and will help the team move forward.”