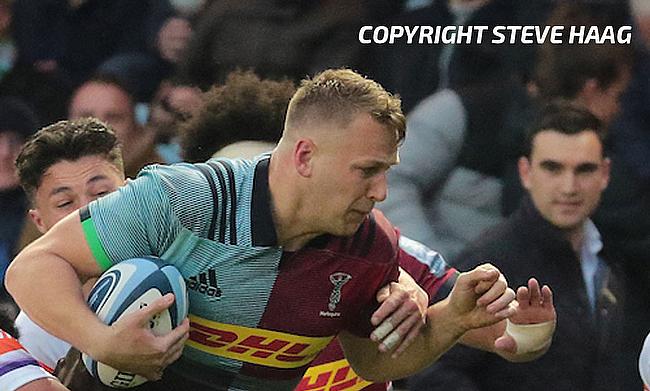 Brett Herron kicked the decisive penalty as Harlequins edged out London Irish 18-21 in their Premiership Rugby Cup encounter in Reading on Saturday.

This is Harlequins' second win from as many games as they occupy the top position in Pool 2 with eight points while London Irish are at second with six points.

The Quins got off the block in the second minute with James Lang scoring the opening try but the visitors lost the momentum when Simon Kerrod and Stephan Lewies were sin-binned in the 13th and 16th minutes respectively.

London Irish capitalised on a numerical advantage as they opened their account through a try from Terrence Hepetema but a penalty goal from Herron gave the Quins a slender 7-8 lead by the 22nd minute.

The Exiles seized the lead with London Irish's second try coming from Saia Fainga'a. Paddy Jackslon missed the conversion but kicked a penalty goal as London Irish went into the break with a 15-8 scoreline.

London Irish failed to take control of the game as they suffered a setback through Fainga'a's yellow card in the 51st minute and back to back tries from Gabriel Ibitoye and Alex Dombrandt meant the teams were levelled at 18-18 by the 68th minute before Herron's penalty goal in the 79th minute ensured the Quins edged out with a three-point win.

“That is probably one of the best wins I have been involved in during my professional career. To come back like that and I thought we defended really well," said Harlequins' Will Evans.

“It was so impressive that in the last 30 minutes that we were the fitter side and testing the try line and we can be so proud of that.

“I come from a club where the back row has been strong and so I am used to it and it is about playing as well as possible and learn from the class players around.