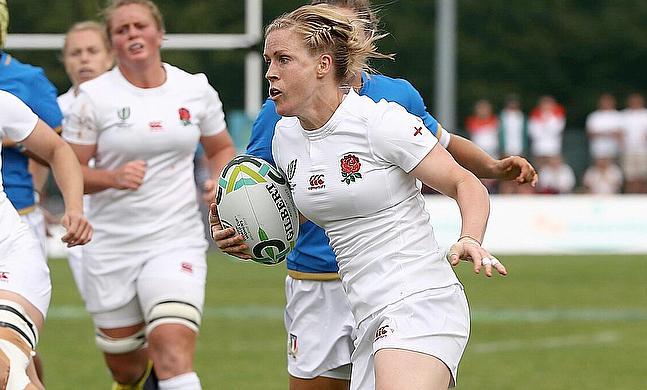 Martin goes back to school as she helps Saracens Women move forward
England Women announce 28 players with full-time contracts for 2019/20 season
England star Scott: New signings can help take Harlequins Women to the next level
Sarah Beckett: "You get to live your dream day in, day out. It is sensational"

Speaking at Twickenham Stadium, Danielle Waterman discussed women’s rugby and the Liberty Fields ad campaign that Guinness have made to tell the story of a female Japanese rugby team that defied the social norms to play rugby.

“It is unbelievable that they went through what they did,” Danielle Waterman told TRU.

“In terms of the social norms in Japanese society, it clearly wasn’t acceptable for women to be playing much sport at all, let alone rugby. The documentary celebrates these women as pioneers, and I think it’s really important to share their stories and show what they overcame.

“A lot of it is still current in today’s society and I can definitely relate to some of the challenges that they had when balancing full-time work and full-time play. It was a story that I think has now promoted the inclusivity of people that are from cultural backgrounds that might not have ever experienced it, not just women in sport and women in rugby.”

As part of the advertising campaign, Waterman and her former England teammate Maggie Alphonsi got to go to Japan to see where this Japanese women’s side played their rugby, as well as getting to visit Tokyo before Rugby World Cup began in September.

“It was unbelievable to get to go to Japan and experience a little bit of Tokyo before the rugby world descended upon it,” Waterman continued. “It is an incredible host nation and to be able to visit Liberty Fields was just, well, quite emotional.”

“We also got to appreciate just what those women were doing because the backdrop was Tokyo and the field was in the middle of nowhere. They made history and I think it was really, really special.”

Waterman understands many of the issues that was faced by her Japanese predecessors. The daughter of Bath legend, Jim Waterman, Danielle started her rugby career with the Minehead Barbarians before having to stop playing aged 12 due to RFU rules preventing girls playing with boys.

“I was the only girl playing in my town and area,” Waterman said. “I played with the boys until 12, so I had the one thing that I loved to be able to do taken away from me, which was pretty tough as a 12- year-old to deal with. They were my group of friends; it was what I enjoyed doing and it was what I was quite good at.

“After a couple of years, I decided to make my own team and off the back of that I found out about playing for South West, I even found out that England had a team. Before that, I didn’t even know that existed. I suppose looking back, I was a little bit of a pioneer myself because nearly 100 women and girls at my club enjoyed the game.”

Not playing for Wasps Ladies at the start of this season, Waterman is spending her time working for ITV as the only female voice on commentary. Having been one of the biggest names in English women’s rugby for the majority of her career, Waterman has only ever been a professional rugby player twice in her 15 years of senior rugby.

“I think the important thing with professional contracts is that they’re here to stay,” Waterman said.  I had a couple of professional contracts throughout my career, but my last year with England 15s, was as an amateur player. So, when I say that I can relate to the ladies of Liberty Fields, I definitely can.

“I think the fact that you can see sponsors of the players involved and how passionate they are about the opportunity to be able to call themselves professional rugby players is super exciting.

“I remember when we got our first contracts, the first time that someone asked me what my job was, I was filling out a form and to be able to write professional rugby player, it made me giggle.

“I think they thought I wasn’t telling the truth, but that’s where the game is going so it is important for them to have professional contracts. They need it, not just for the on-field development, but the off-field rest and recovery, tactical, technical analysis, whatever it may be, to be the best athletes that they can.”

Last week, England Rugby announced which 28 women’s players would be receiving professional contracts, with 16 of those awarded contracts either at Harlequins or Saracens. During this off-season, it emerged that Saracens and Worcester would be paying their players to play in the Premier 15s competition.

“I think this season, there will be an interesting dynamic between some of the top teams,” Waterman said. “Quins have recruited a huge number of international players, not just England and across Europe. Because of that, I think they’re going to be the team to beat this year.”

“They have lost in two finals, so you can see why they have recruited why they have. In terms of moving the league forward, is it the best opportunity to grow the game? I’m not quite sure, but it is now up to the rest of the teams to try and produce solid performances each week.

“The contracts that players are getting and support from the club game is the best that it has ever been and we are seeing that reflected in the performances we are seeing across the game.”