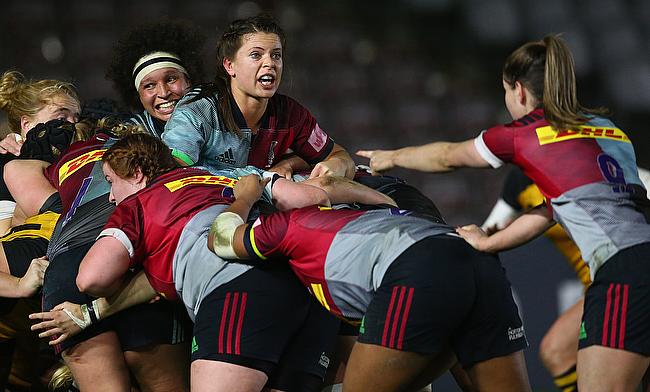 Two Tyrrells Premier 15s finals for Harlequins have ended in two defeats against Saracens, but their second-row Abbie Scott feels that the new arrivals at the club this summer can help them take the next step towards silverware.

As the stature of the English top flight league continues to grow, the last few months have seen a number of high profile signings from various different clubs.

Harlequins certainly have not been quiet on that front and in recent weeks the likes of England trio Sarah Beckett, Amy Cokayne and Lagi Tuima, Italy’s Giada Franco, Scotland’s Chloe Rollie and Ireland’s Anna Caplice have arrived at the club to strengthen an already strong squad.

Scott, 26, is best placed to talk about the England internationals that have joined - and she believes that they will all bring something to the team

Thankful for the opportunity and excited to get started. #COYQ?? https://t.co/KpNLfQZzPd

“She will complement the way that we already play and the players around her because she is a great ball carrier. She is also very physical and will help our back-row take things to the next level this season.

“Amy will also bring a lot to this squad. I have worked with her for a number of years now with England and we have built up a great relationship from a hooker and lineout caller perspective and hopefully we can do that with the club too.

“Lagi is going to be very exciting. She will bring a lot of creativity and something different to our team.

“She is very creative and loves to throw the ball about, she plays for England now, but her Fijian roots are definitely still in her game and she can do anything with the ball in hand.

“Sometimes not even her team mates know what she is going to do and I am looking forward to trying to keep up with her out there on the pitch and trying to read her next move because she is a real talent.”

“We also have Italian, Scottish and Irish internationalists joining the squad and when I was in training last week there was such a buzz around the group as the new guys got used to their new surroundings.

“To have new input and new ideas will be brilliant and we are all excited to be working together now. The league gets better year on year and it will be interesting to see how things pan out this year.”

“The quality of rugby will certainly go up and I think the fan bases at all of the club will keep growing.”

“Playing at The Stoop is amazing”

Scott mentions growing fan bases and ‘Quins are certainly one of the clubs who have a great following, leading to six of their home games being played at The Stoop this term.

Their opening Premier 15s fixture against Richmond on September 21 will be the first of the scheduled matches at The Twickenham Stoop for Harlequins during the 2019/20 season, with the others including a double-header with the Men’s squad against Gloucester and standalone matches against Bristol Bears, Saracens Women, Loughborough Lightning and The Game Changer against Wasps FC Ladies on April 11.

“I think it is great to play six games at The Stoop and it just shows the standing - and the backing we have - within the club as a whole,” Scott said.

“Before I came to Harlequins I had only played at the ground for England, but since the club have started playing women’s games there we have been well backed by the fans.

“It just shows how women’s rugby is growing in the wider landscape and we just want to build on that momentum and play in front of big crowds at The Stoop on a regular basis.

“For that to happen though we have to perform well and entertain the new people who come along so that they come back again and again.”

Scott mentioned how tightly knit the whole Harlequins club is and “there is a lot of crossover with the men’s and the women’s squad” according to her.

“We try and learn as much as we can from the men’s squad and what they do,” Scott stated.

“I know that the coaches from both teams work together a lot and share a lot of ideas while for us as players we are able to speak to people on the men’s side and that can be really helpful.

“For example, the front-row players have the chance to pick the brains of people like Adam Jones, Kyle Sinckler and Joe Marler and I know that the hookers have spent some times with the men’s hookers too.

“[Head of rugby] Paul Gustard has also been in with us to take some sessions our coaches have been in to help out with some men’s sessions and it really is a two-way street when it comes to things at Harlequins.”

Scott was involved in England’s Super Series campaign in San Diego in June when they beat the hosts USA, Canada and France, but lost their last game to New Zealand.

That showing has left them second in the world rankings behind the Kiwis ahead of a busy 2019/20 as the build-up to the 2021 World Cup continues.

“It was such a positive series for us in America,” Scott said.

“Although we had been professional since January there were a lot of young players given their chance while there were a number of new combinations tried out and built upon in various parts of the team.

“We were missing certain players so to have the likes of Zoe Harrison and others coming in and really putting in good performances leaves us in a good place going forward with the strongest wider squad that we have ever had since I came into the set-up.

“We are hungry, we want to keep learning and I think three wins was good and we learnt a hell of a lot out there.

“We have all had a good rest and feel in a good place two years out from the World Cup, now we have to get the season off to good starts with our respective clubs before the Autumn Tests come around.”