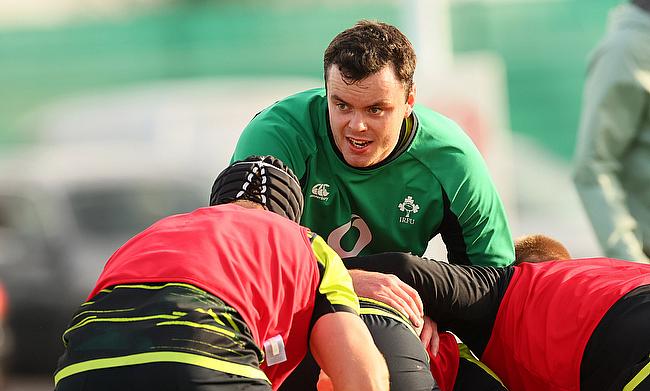 James Ryan made his Ireland debut in 2017
©INPHO/Billy Stickland

“He sets high standards and drives them home”: Ferris on O’Connell’s attention to detail
“Dave is tough and has a great attitude”: Cherry puts in hard yards to get to the top
Scotland recall Sam Skinner to Six Nations squad ahead of Ireland game
Keith Earls signs new one-year deal with IRFU

Ireland have a tough test at the weekend as they travel up to Murrayfield to face a staunch Scotland side who, to their credit, have looked a stronger outfit than anticipated so far in the Six Nations.

Ireland Head Coach Andy Farrell is expected to take advantage of a blossoming partnership in the second row by naming James Ryan and Iain Henderson for the game on Sunday.

Ryan spoke this week about why his relationship with Henderson is so strong and underlined the qualities that his scrum partner brings to the national side.

He said: “I have a great relationship with him. I think I get along with Hendy as good as anyone in here. We’re good mates first and foremost, but I really enjoy playing with him.

“He’s a very smart player, and he brings real leadership as well, and you can see that as he was club captain at Ulster.

“When he’s at his best, he’s such a destructive force, and you love playing with somebody like that alongside you in the second row, so it’s a privilege to play with him when I get the chance.”

With Scotland coming off the back of a narrow 24-25 loss to Wales last round, Head Coach Gregor Townsend’s team will be hopeful of making amends this weekend with home advantage.

The Scots have already demonstrated that they are not a force to be underestimated this tournament, having already beaten England in a night to remember at Twickenham at the start of last month.

Looking forward to the challenge, James Ryan has observed Scotland’s recent progressions and has emphasised the importance of the clash for his nation.

He said: “I think [Scotland] are a very strong side who will be very motivated playing at Murrayfield, they’ve shown how far they’ve come since the autumn in the campaign so far.

“They’re a very dangerous team; you look at their back three – Van der Merwe, Darcy Graham and Stuart Hogg – in terms of attacking threats, they’re probably as dangerous of a back three that you’ll come across in the tournament.

“They’re a very dangerous side, and that talent is matched up front. They’re an aggressive and pretty abrasive pack, so it’s a big one for us.

“We’re always trying to balance our game and have a bit of variety - Scotland are no different. I think they’re coached very smartly, and they have a number of quick players in the set-piece.

“We’ve just got to be awake for that really, and it’s something that we’ll look at.

“You’ve got to go on the road and win big games in this championship, and that’s what we’re looking to do this week.”

Ireland will be fancying their chances at the weekend having won their last five competitive fixtures against the Scots, the most recent of which being the 31-16 December victory at the Aviva Stadium in the 2020 Autumn Nations Cup.

But Ryan holds little value in such statistics, believing that history is history and Ireland must focus on the game at hand if they are to emerge victorious after 80 minutes on Sunday to carry on their winning ways.

He said: “It probably doesn’t count for a whole lot - every time you play another test match, it’s another opportunity, it’s another game.

“I think they’ve a massive counter-attacking threat. They’ve substantial breakdown threats as well. That’s two of the areas that we’ve looked at and worked on." - @HendersonIain on Scotland.#ShoulderToShoulder #SCOvIRE #GuinnessSixNations https://t.co/YmbjubElJP

“Once the game starts, I think how you’ve faired against them in the past probably doesn’t count for a whole lot. It’s a new game.

According to Ryan, the recruitment of forward coach Paul O’Connell has already paid tactical dividends and has seen Irish set pieces become a strength under the former Ireland captain’s guiding hand.

He spoke about O’Connell’s attention to detail which he believes has helped take Ireland to another level, building on their Autumn Nations Cup campaign last year.

He said: “I think it’s improved over this campaign which has been great. I wouldn’t say that there has been a massive change to the nuts and bolts of our lineout.

“But I think what [Paul] has introduced is the small intricacies and levels of detail that really make the difference at this level.

“I think set pieces have been an area of the game which have been a real positive for us so far in the campaign, in terms of our scrum and our lineout, and we know how important that is at this level.

“It’s an area that we felt, looking back at the autumn, could have been a bit stronger, so we’re in a good place with that now.”

O’Connell’s recent success with the side has been a testament to the “long hours” he has been putting into training and match preparation. Still, he admitted this week that he would ideally have even more time in sessions with the Irish forward line.

Despite O’Connell’s desire to have more contact time with the squad, Ryan has spoken about how he is enjoying his training sessions and says that the current balance is leading to visible improvements on the pitch.

“The way that the training works is that you have three or four blocks, one block could be lineout, and one could be scrum, and the other blocks could be team-orientated,

“So, I suppose you have quite a bit to fit in there. That’s just the way it is, and there has to be a balance.

“I’m enjoying all the training that we’re doing at the moment in terms of our set piece, and I think we’re coming on in that area.

“Do I want more? I think we’re trying to fit it in as best as possible around training, but I think it’s working pretty well at the moment.