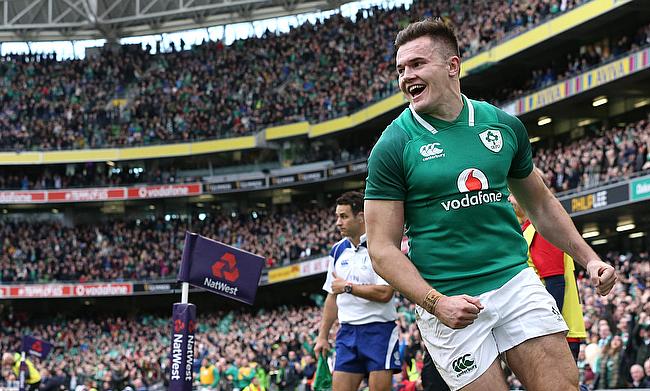 Ireland international Jacob Stockdale revealed that he received abuses and death threats on his social media account following his side's defeat to New Zealand in the World Cup in Japan last year.

Ireland despite a shocking 19-12 defeat to Japan, managed to reach the quarter-finals after wins over Scotland, Russia and Samoa but encountered a difficult knock-out game against the All Blacks.

New Zealand scored seven tries in the game while Ireland managed just two as the 2011 and 2015 World Cup champions registered a 14-46 win to end the campaign for Joe Schmidt's men.

“You get certain messages, private messages and stuff that are incredibly hurtful or aggressive,” said Stockdale, who has played 28 Tests for Ireland scoring 16 tries.

“After the New Zealand quarter-final I got messages from people telling me to kill myself and things like that, which is obviously awful.

“For me whenever I was reading those messages, they didn’t annoy me as much because I knew these people were trolls and they were just trying to get a reaction out of me. I’m sure . . . I’d hope they didn’t actually mean what they were saying.

“Funny enough the ones that really annoyed me were the ones where people were saying that I wasn’t any good at rugby.

“They were frustrating because I felt they didn’t know as much about rugby as I did. It felt that they really meant it [the criticism] and those would be the ones that would annoy me more than the people messaging me and telling me to top myself.”