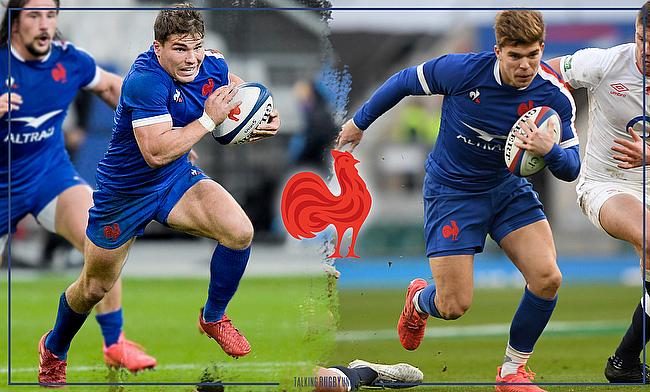 France are experiencing a 'golden generation' of players
©TRU

Wales continuing to rely on the firepower of Jonathan Davies
Max Malins starts over Elliot Daly against France
“Dave is tough and has a great attitude”: Cherry puts in hard yards to get to the top
Gill Burns MBE: A trailblazer for the women’s game and challenging the status quo

During his time playing in England, Jérôme Riondet was described as ‘mad’ and as ‘a character’.

For me, I have only ever known Jérôme, the journalist who I met whilst helping coach young players in the French Alps. He is intelligent, insightful, thoughtful, but most importantly he sees the game of rugby for what it is, a game. A game to be played in the way it was intended.

Whilst during his playing days with London Wasps, Harlequins, Oxford University and London Welsh his Gallic flair and infamous no-look pass may have frustrated coaches and teammates, this weekend England must now contend with the same flair from Jérôme's countrymen at Twickenham.

Having followed the Premiership closely as a commentator for SFR Sport, where he worked alongside former France head coach Philippe Saint-André, Jérôme says that if England keep playing the way that they have done in the opening three rounds of the tournament, then it should be a routine day out for the French.

“I have been watching and following the league for four, five years and you can see they (England) have got pace, speed in the backs, fantastic players in the backs,” Jérôme said. “But, when Elliot Daly gets the ball, he kicks it all of the time. Every time that they get the ball, they kick the ball back. It is just bizarre; it is not their game.

"Maybe in the front five and in the backrow, they are not as good as they used to be just before the World Cup, because England were one of my favourites and even more when they beat New Zealand.

“Honestly, if they play the same rugby they are playing at the moment, I can’t see France losing. They are not big in the scrum, they are not big in the lineout, but they are playing France. They can say that they have played the Calcutta Cup, the Welsh, Italy, but the best enemy for England is France and the best enemy for France is England. They will definitely raise their level to play France.

“The only matter is, are they confident at the moment? Are the players confident? Will he play Farrell at the fly-half position? I don’t like Farrell unless he is the fly-half. I saw him play for Saracens, and when he is in a game plan and it works perfectly because his forwards devour everything, it is fine because he is still in a game plan.

“But when he has to adapt himself to a new game plan when something is struggling, he is not good. France have to create disorder, because that is the best rugby we can play, when everything is not set up. I think England will try and slow the game down to just be scrums and lineouts.

“They don’t want the pace and they have tremendous players. Watson (Anthony) on the wing, Jonny May, you have got Elliot Daly in the backs and I don’t think it is the right combination in the backs with Farrell and Slade. I like Slade, but there is a lack of pace when you have Farrell and Slade in the centre.

“The best thing might be for England to play George Ford, put Henry Slade at inside centre and you put an extra player on the outside, which could be someone like Jonathan Joseph with pace, because they are too predictable in the midfield at the moment.

“Not in the back three, but if you look at the back three, what do they do? They kick. You have got maybe one of the best back threes that England have ever had, and they just kick the ball. There is no counter-attack. No nothing.”

It is no secret that France are in a golden generation of players, many of the players who contributed to the 2018 and 2019 Junior World Championship teams now having graduated to Fabien Galthié’s team.

Of course, Antoine Dupont and Romain Ntamack are the two poster boys, but Galthié's reign feels altogether different to a number of his predecessors.

Raphaël Ibañez serves as the team’s manager, Laurent Labit as attack coach, Shaun Edwards as defence coach and Karim Ghezal and William Servat combine to coach the forwards, but whilst these roles are nothing new, it shows a tremendous shift in mindset of the national team as they prepare to win a World Cup on home soil in two years time.

“If you compare to what has been done before, how many people were in the staff for (Guy) Novès, for moustache (Jacques Brunel), even for Philippe and even before him when we had Lièvremont,” Jérôme said.

“There were three people in the staff, one analyst, where now there is four. For the first time, they actually bring someone in from the outside in Shaun Edwards. They actually have a really good staff. He (Galthié) has it all because Bernard Laporte gave him the opportunity. With Bernard, you can like him or dislike him, but he does very good things for French rugby and he knows what Fabien needs.”

Having not won the Six Nations since 2010, France are still on course for a Grand Slam, having beaten both Italy and Ireland before their game against Scotland two weeks ago was postponed.

This weekend’s starting XV has four changes to the one that took on Ireland a month ago, Gabin Villière dropping out due to injury to be replaced by Teddy Thomas, whilst Virimi Vakatawa starts in the midfield, Dylan Cretin starts in the back-row in place of Anthony Jelonch and Romain Taofifénua starts at lock in place of the injured Bernard le Roux.

Perhaps one of the headlines for Galthié’s selections for Saturday’s game is that Matthieu Jalibert maintains the starting fly-half spot, with Romain Ntamack wearing the number 23 jersey. Each incredibly gifted and capable of managing a game of Test rugby in their formative years, the talent available is frankly staggering.

“He (Galthié) has continued the work that has been done with the U20s,” Jérôme said when asked about why France’s crop of youngsters have flourished. “The big change was when the National Technical Director moved from Jean-Claude Skrela to Didier Retière.

“He is one of the key men in the success of France now and you can mention that, because he completely changed everything with the way players were bred. They changed completely and they came back to rugby players, not only big athletes. Now they are athletes, they are also rugby players.

“You can see that now, we have five scrum-halves at international level. There is (Baptiste) Couilloud, Dupont, (Baptiste) Serin, all with different styles, but with a lot of speed too. The other big difference is that we have very good fly-halves. You can look at Carbonel (Louis), Belleau (Anthony) and you have Ntamack and Jalibert. They are very good and maybe it is time now to set the number nine and 10 and let them go.”