Gill Burns MBE: A trailblazer for the women’s game and challenging the status quo 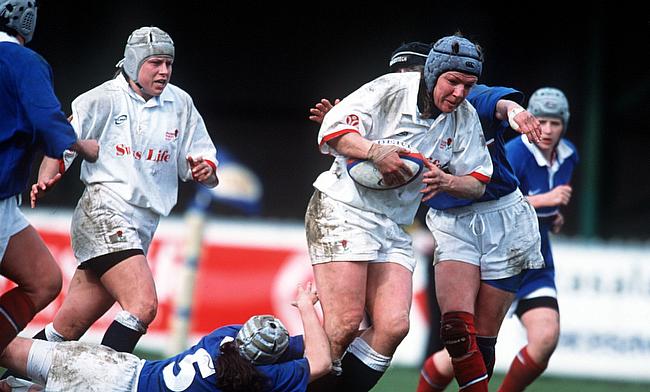 TRU’s Elizabeth Cartwright: What Rugby Means To Me
Stef Evans Exclusive - Falling back in love with rugby and turning #ICare awareness into action
Charlie Beckett Column: Why #ICare
Exclusive - Rachael Burford: “We want to showcase our role models in the game to help inspire others”

As emails go, receiving one from Edge Hill University amid Six Nations press conferences, Gallagher Premiership media opportunities and various interview requests might not be something you usually hover over.

If I had skimmed through my inbox and focused on what time Eddie Jones was announcing his England squad, for example, the opportunity to hear from a trailblazer of rugby union would have passed me by.

This attitude seems like it would be a foreign concept to Gill Burns MBE. Exploring different options and not 'sticking to the norm' is something that is very much part of her DNA.

During Edge Hill’s guest lecture on International Women’s Day, the former England captain detailed her journey through sport, and the barriers she faced when challenging seemingly entrenched ways of thinking.

Even as early as her time at Prescot School, Burns and her friend Jane were determined to play basketball despite it being classed as a ‘boys sport.’ It is perhaps unsurprising to learn that the World Cup winner did succeed in her attempts to open that particular door, and even this small snippet in her story can provide bucket loads of inspiration for today’s generation.

Throughout the talk, questions from the participants on the call continue to help paint a picture of why Burns is such a pioneer for women’s rugby.

Despite her long list of achievements - whether that be helping to organise an England international against Sweden (which was also her international debut), becoming president of Waterloo Rugby Club or receiving her MBE - Burns has always looked to change opinions and it is something she continues to fight for.

“When I look back, I have had so many memories and it is because I, and my playing colleagues at the time, had a dream and we all did everything we could to help make it happen,” Burns said.

“We were privileged to play a part in the development of the women’s game and helping society accept that women deserve an equal chance to play whichever sport they choose to.

“On International Women’s Day, we celebrate the work done by Emily Pankhurst and her daughters and the women’s social and political union. They were incredibly charismatic characters and they were inspirational speakers. These were role models who women could aspire to be.

“Similarly in sport, and particularly in rugby, it is important to have that charismatic and inspirational leadership to empower people and I am very pleased to say that the young women who want to play rugby today do have people to aspire to.

“Women in rugby are now represented as senior administrators, match officials, coaches, journalists and past players appearing on TV as pundits, all alongside the international players who are recognised by TV and social media. Don’t get me wrong, I am not saying women are represented equally in regards to sport just yet, but I am sure you all know male and female role models from the sport you enjoy, something that wasn’t the case when I was a girl.”

In a way, Burns’ parents were her role models when it came to sport. She says her Dad used to play football with her in the garden or he'd be her tennis partner at the park, but now aspiring young athletes do have female rugby players to look up to.

Burns was keen to mention former Waterloo duo Sarah Beckett [Harlequins and England] and Holly Aitchison [Saracens and England 7s], who she coached during their school days at Range High, but she also highlighted World Cup winner Rachael Burford as a prime example of how the women’s game is continuing to evolve.

“In a way, I think children are lucky today because they do have great role models,” Burns said. “Rachael Burford set up the Girls Rugby Club, which has been very active during lockdown and they are training on Zoom and there are girls of all ages and it is global. They are engaging and they are seeing Rachael and she is a really good people person and having role models like that for girls to look up to is awesome.”

The @Premier15s season begins this weekend and @RachaelBurf12 has juggled her preparations for the new campaign with her devotion for growing the game.

We chatted to the Harlequins star about the @Girls_RugbyClub & the start of the Allianz Premier 15s! https://t.co/eHu2PxwZik pic.twitter.com/zN5Eir9y52

Players such as Burford have become figureheads for the sport, with the women’s game seemingly on an upward trajectory. Burns’ own achievements for England in 1994 did spark media attention from the national press and even Burford’s own World Cup triumph 20 years later also put the Red Roses on the map.

But since professionalism has been introduced to the women’s game, there seems to be a momentum shift in the coverage of the sport with key England international fixtures shown on Sky Sports and last year on terrestrial television. The Allianz Premier 15s is also available to stream live on YouTube for free and the opportunity which the Six Nations has next month enthuses Burns.

In February, tournament organisers announced this year’s championships would take place in a reduced format across four weekends due to the impact of Covid-19, but despite the setback of each team only playing three fixtures, Burns wanted to turn the situation into a positive.

She said: “I could answer that with yes and no,” she said. “We will look at the positives because that [April] is when the event is going to be. Coverage can be at prime time. We always play second fiddle when we play alongside the men in the same time of the season, so perhaps the coverage can be at a better time so more people can see. There is the potential for sponsors to come on board. We will have a huge audience watching the women’s game so all England fans can focus on England playing.

“It is a privilege when we play the same week as the men and if the women have a game at Twickenham, it is a dream come true for the girls to play there, but the people who stay and watch the game, which is like 12,000-15,000, aren’t necessarily the true women’s game supporters.

“It is now good that we have this opportunity to get out around the country, so hopefully we can make the most of it.”

During last autumn’s double-header with France, a combined 1.5 million people tuned in to watch the Red Roses on BBC 2 and Burns will undoubtedly be hoping for similar coverage when the tournament gets underway in a few weeks time.

But despite there being a buzz around the national side, Burns also recognises there is still more to be done to grow the game in terms of participation.

In her profession as a PE teacher, Burns always looked to allow her students to play whatever sport they desired, but she is concerned the current focus being placed on academics could hinder the sporting development of children in schools.

She added: “I arrived at Range High School and there were distinct boys and girls PE departments and the girls just did hockey, netball, rounders. I added because I could, rugby, football, basketball, cricket, lacrosse, softball, and even a treasure hunt!

“It is the ability of the PE staff who are employed to offer those sports and it worries me going forward because PE staff are now academic staff and it is all about exams and they are coaching and teaching exam techniques instead of sport, unfortunately.

"The way we can improve that is that increased exposure of women who are playing sport at the highest level. It is spreading that word and getting into primary schools and educating children from an early age that boys and girls can play any sport they want to, so allowing them to try it is absolutely imperative. We have got to celebrate athleticism in regards to women."

?? "The enjoyment I take from watching a game of women’s rugby is one reason #ICare."

Some of the questions asked by Edge Hill students, staff, alumni and guests also focused on tackling gender bias. For that, Gill Burns, shaped by her determination to break through the status quo, was perhaps the perfect person to offer advice on this subject as she continues to be a trailblazer for the women’s game.

“Old ideas have been forged historically and as society is educated, the majority of those antiquated ideas will die out. Equality, in time, will actually arrive so it is very difficult to have gender quality now and we are working on it.

“In terms of lessons which can be learnt from the past, I think success in life is about working with others to be agents of change. Don’t demand change before it is deserved as being an agent of change is the most effective thing to do, but mankind is at its strongest when men and women work respectively together in harmony. Life hasn’t always been fair, but instead of complaining about the past or even the present, be that agent who helps change things for the better.”