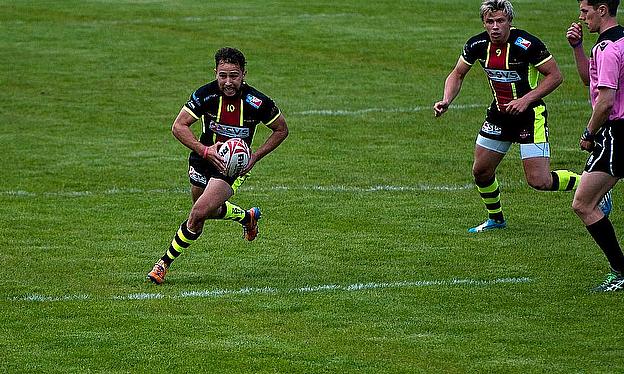 Luke Treharne (left): 'The crowd were amazing in the stadium, and staying in the village was so surreal seeing all the stars around you...'

Commonwealth 7s Review - South Africa End NZ Dominance
Would the Gold have gone to NZ if All Blacks were included?
Mighty Boks rock All Blacks
Sevens heaven at Ibrox
Treharne Confident ahead of Wales Debut
Treharne set for Sevens debut

Speaking before the tournament, Luke Treharne admitted Wales were hoping to medal at the 2014 Commonwealth Games Sevens. However, falling short to Australia in the last play of the semi-final saw this goal slip away and Wales finished the tournament in sixth place, having lost to England in the Plate final.

Despite not quite reaching their targets Luke Treharne, who picked up his first cap at the tournament, said the whole experience was one he will never forget.

"It was pretty amazing," he stated. "It was a very surreal experience spending ten days in the real international rugby set up.

"The crowd were amazing in the stadium, and staying in the village was so surreal seeing all the stars around you.

"I would be walking to breakfast with Bradley Wiggins in front of me, Tom Daley too. I saw Usain Bolt once as well, it was an amazing experience."

The Glasgow Games saw a record-breaking crowd for a sevens tournament, with over 100,000 people attending over the two days at the Ibrox Stadium.

"It was amazing, a totally different rugby crowd than I have ever played in front of," Luke continued.

"A lot of the supporters weren’t regular rugby fans but had bought tickets and came down to support which was great.

"There weren’t two crowds supporting one team or the other, they got behind every team which was amazing.

"Any team that ran out got amazing support and when the match was finished they gave each team a standing ovation which was really special.

"Some of the more experienced boys who have played at huge venues like the Millennium Stadium were saying that it was a louder atmosphere at Ibrox, it was really amazing."

Wales’ hopes of medalling were snatched away from them in the last play of the semi-final against Australia, a game Wales feel they should have won having taken an early lead.

"Everyone was pretty down after that game, particularly as we had pretty much won the game.

"To lose it in that manner was really heart-breaking, not so much losing on the buzzer but we felt the referee gave seven or so penalties in the last 30 seconds to Australia that we maybe could argue could have gone our way.

"It was a tough one to take but it is huge testament the squad how we came back out for the Kenya game and put in such a professional performance."

Wales secured their place in the Plate final with a strong win over Kenya, a game in which Luke crossed for his first international try.

"That was very special," Luke said. "I had thought to myself before the Games it would be amazing to get a try in the tournament and I don’t think I’ll get any easier ones than that.

"To run it in in the last minute and get the chance to enjoy it was awesome and it was unforgettable to score my first international try."

Wales went on to lose the Plate final in the last play against England, a result that Luke admits was tough to take.

"That game was slightly different to the Australia game, fair play to England they kept going and they have the individuals who can score from anywhere.

"It was still tough to take but it was a different manner to the Australia game where we felt the referee maybe finished the game for us, but it was just as tough to lose in the last minute.

"We spoke after the game about maybe we could have used our substitutes a bit better, but at the end of the day they scored and we should have stopped them."

Despite this disappointing end to their tournament Treharne says the Welsh squad were happy with their efforts.

"It was a good feeling after, considering where we finished," he said.

"We played well as a team and scored some really amazing tries, even the BBC voted our try against Australia as the best of the tournament.

"We felt that we let some key moments slip and with some boys leaving it would have been nice to medal rather than finishing sixth, medalling would have also put us in really good shape going into next year’s IRB legs."

For Luke and the rest of the squad there is a few weeks break before either pre-season or for Luke back to The University of Exeter where he studies medicine, but he admits he is hoping to continue his Sevens as well as his study.

"There are a few weeks off now before pre-season. Obviously I’m back to university but I am going to try and see if I can get some time off to do the Gold Coast Leg of the IRB Series, it is the first leg which would be something very special for me to do but that is still a long way off in the future."

For the immediate future however, Luke’s plans are made. The young Welsh star is off travelling with his brother for some well-earned rest after an exceptional season.