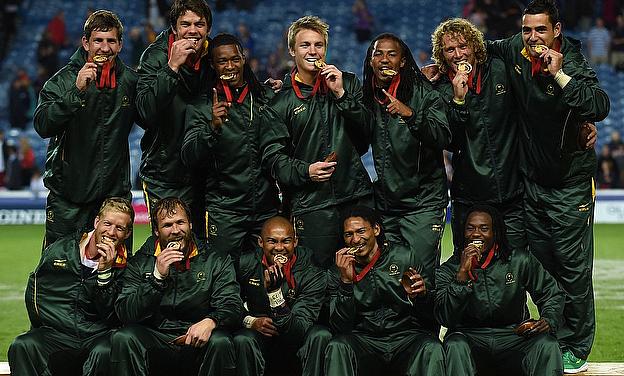 The ruthless All Blacks have held the sport in an iron grasp ever since it was introduced at Kuala Lumpur in 1998, winning every game they had played on their way to four golds.

But the Kiwis were never able to impose themselves during the Ibrox final as the Springboks held off a late charge to secure victory.

An impressive 180,000 fans - a world record for a rugby sevens event - cheered on the action over four sessions at the home of football giants Rangers.

It was South Africa who looked as if they had taken inspiration from the Glasgow club's Iron Curtain defence of the early post-war period as they stood firm to secure a 17-12 win.

After ploughing their way through three group games and then Kenya and neighbours Australia in the knock-out rounds, New Zealand boasted a tally of 153 points for and just 28 against before kicking off the final.

The South Africans, meanwhile, had ended Scottish ambitions of a home medal at Glasgow 2014 in the quarters before proving too strong for Samoa, who they beat 35-7, in the last four.

But they had also played the more eye-catching rugby, scoring 28 tries before the final, compared to New Zealand's 25.

It looked like normal service was about to commence when the Kiwis' Sherwin Stowers scored early on.

But a double from Seabelo Senatla - the competition's top scorer with 11 tries - and another from Cecil Afrika put the Boks on the verge of victory.

Joe Webber pulled a score back for the reigning champions but Akira Ioane's late fumble killed off New Zealand's hopes of five in a row.

In the bronze medal match, Greg Jeloudev's first-half double helped Australia walk off with the medals after they beat Samoa 24-0.

Scotland missed out on the chance to claim a new best-ever finish at the Games when they lost to England in the Plate semi-finals.

As with their two previous tournament defeats against the Kiwis and Springboks, the hosts allowed the Auld Enemy to score three times - Christian Lewis-Pratt, Thomas Powell and Dan Norton touching down for England - before they got into gear.

With England down to six men after Dan Norton was sent to the sin bin, Mark Bennett finished off a move from close range before Lee Jones gave Scots inside Ibrox hope with his seventh try of the tournament.

But Stuart Hogg blew his chance to send the raucous home crowd into dreamland when he allowed the returning Norton to catch him just before the line.

The tournament may have ended in disappointment for his side, but Edinburgh wing Jones hopes it can help him earn a recall to the full Scotland side.

The four-cap international told Press Association Sport: "This has been a big shop window to showcase your skills and I hope I have done myself justice here.

"I want to get back into the 15s national side and that is now my aim."

Having beaten Kenya 28-5, the Welsh suffered the same fate as the Scots as they allowed England to claim fifth place with the last move of the Plate final.

Wales had led after scoring three times through Lee Williams, William Harries and Luke Morgan. But after earlier scores by Dan Bibby and Marcus Watson, Phil Burgess dived over in stoppage time to give England a 17-15 win.