Hogg: The Warriors have made me the person and the player that I am today 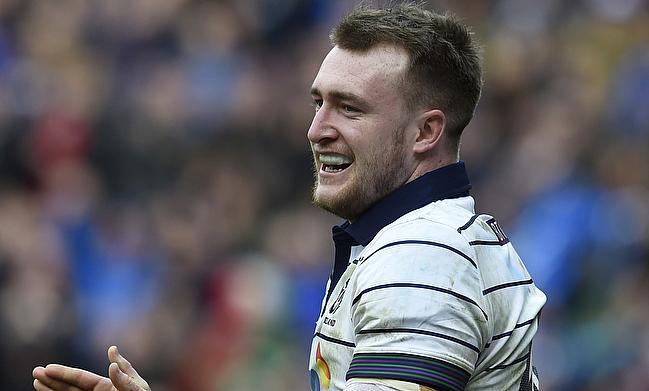 Stuart Hogg will play his final game at Scotstoun
©PA

Some players are just made for big games and Stuart Hogg is one of those.

As the full-back prepares to play his last game at Scotstoun on Friday evening for the Warriors against Ulster in the Guinness PRO14 semi-final before his summer move to the Exeter Chiefs he is determined to go out on a high - and help the team into next week’s final at Celtic Park.

Aged just 26, a remarkable 67 Scotland caps have been earned by the Hawick star already, he has been on two British & Irish Lions tours and was part of the Warriors historic PRO12 title triumph in 2014/15.

He marked his breakthrough season in 2011/12 by scoring a stunning hat-trick of tries away to reigning PRO12 champions Munster and another score in the semi-final against Leinster.

Stuart has since gone on to play a key role in many of the club's most memorable occasions - and is fully focused on making more memories before heading south.

“I can’t start thinking about the fact that I am moving on after this season, that is all to come in the future, I have been feeling good since I came back from my latest injury and all I can do now is make sure that I am on the money against Ulster and help us to get the positive result we need,” he said.

“If you start looking at personal things then you can become selfish and that is not what I am about.

“I want to put in a good performance and that is the best way that I can think of to thank everyone at the club for the great few years they have given me here at Scotstoun.

“The fans have really had my back over the last few years and we have been on a journey together which is not finished yet. There is more to come from Stuart Hogg in a Glasgow Warriors jersey that is for sure.

“I want to express to everyone just what this club means to me and as I say you can speak all you want about it, but for me the best way to show that is through performances on the pitch.”

And ahead of his move down to England Stuart has underlined just why he chose Exeter when clubs throughout Europe were after his much coveted signature.

“People have talked about me about me leaving in terms of financial reasons, but that bugs me, if I was leaving for money I’d be going to France but I’ve no notion to go there,” he stated.

“I’m moving to a club that play an exciting brand of rugby, with good players, coaches and incredible fans. They want to achieve something special and I want to be a part of it. I’m fortunate to be in a position where I was able to pick the club I wanted and they wanted me.

“I want my wife to be happy and the kids to be in an environment they’ll love just like they have done up here at Glasgow.

“The more and more I watched Exeter play they excited me and they have a great family feel to things down there very much like up here at Scotstoun.”

So, when he looks back on his time at the club come this summer which players will Stuart remember playing alongside most in a Warriors jersey?

“Graeme Morrison, as a young Academy player coming through at first you had to earn his respect because he was one of the senior players, but me and ‘G Dog’ became good friends over the years and we have had some good times on and off the rugby pitch,” he stated.

“I became close with Pat MacArthur until he was forced to retire a couple of years ago and he was a very strong player, somebody you wanted to play alongside.

“Myself and Duncan Weir were of a similar age and came up through the ranks together and Sean Lamont took me under his wing and helped make me a better player.

“However, the great thing about the Warriors is that we are one big family and everyone I have played alongside over the years has had an influence on my career.

“When you are part of a team that is going out to play you are not thinking of it in terms of the individuals who are there, but about what you as a collective can do and team work and team spirit is key.

“I think over this season the spirit under Dave Rennie has been brilliant, you can see the way we like to play with flair, but also know how to really work hard for results and I love that mentality.

“I certainly won’t forget playing for the Warriors, it has made me the person and the player that I am today.”

And certainly the ‘Warrior Nation’ will not forget Stuart’s contributions in the jersey, but all of that is for another day as for now there is still a semi-final to try and win and a PRO14 trophy up for grabs.