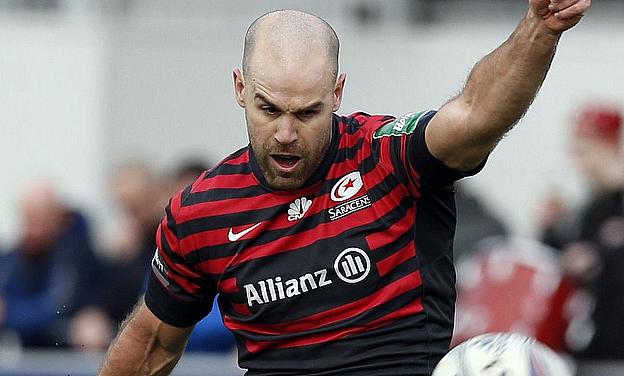 Charlie Hodgson kicked all of Saracens' points as they secured a narrow 15-10 triumph over Sale Sharks at the AJ Bell Stadium. 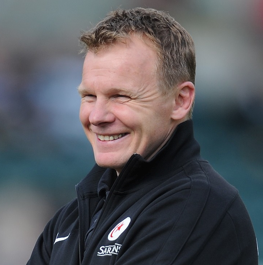 The likes of Mako Vunipola, Alex Goode and Kelly Brown played a full part in their victory over Sale which took them to the top of the Aviva Premiership table.

"For the returning internationals, it's not easy to come from one environment to another," he said. "It tells you a lot about our club that Brad Barritt, Mako Vunipola, Chris Ashton, Duncan Taylor, Kelly Brown and Alex Goode can come back and perform the way they did tonight.

He added: "I thought that Charlie Hodgson, Richard Wigglesworth and Neil de Kock controlled the game beautifully. After a six-day turnaround, to come up to Sale is a difficult ask and I thought that we were deserved winners.

"I thought that we played well in the first half and deserved to be up at half-time but we weren't. What we did this time around was show a lot of composure and patience in the second half."

Sale's director of rugby Steve Diamond admitted that they were beaten by the better team.

Although a Marc Jones' try had put them in command, they couldn't sustain it and the Sharks succumbed to their seventh Premiership defeat of the campaign.

Diamond said: "They probably handled the weather a little bit better than us. Overall, I'm reasonably happy as we managed to get six points out of these last two games.

"There were a few decisions early doors that went our way, he probably should have yellow carded Quates (Mark Cueto) for tackling the guy without the ball, but equally there was a high tackle which wasn't seen for us.

"But the decisions didn't go our way in the last 20 minutes, I think the penalty count was 14-6 in the whole game which is disappointing, so we'll have to work on our discipline a bit more."

The Sharks couldn't sustain the pressure in the second period as the 2011 champions dominated the game and their stand-off added four further penalties.

Mark McCall's men were looking to respond to their shock 22-13 defeat to London Irish last weekend - the team's only regular season loss at Allianz Park.

They welcomed back Brad Barritt, Mako Vunipola and Alex Goode from England duty to boost the squad, but it was Sale who started the brighter as good hands from Johnny Leota and Rob Miller sent Mark Cueto away on the right-hand side.

However, impressive defence from the visitors earned a penalty and allowed them to set up their first attack of the game.

Hooker Jamie George showed excellent dexterity to put a kick in behind the hosts' back three and, after the Sharks had again infringed, Hodgson converted the resulting opportunity to take Sarries in front.

Although Cipriani levelled matters following a mistake from Vunipola, the London-based outfit were in control of the match and should have scored when their stand-off's wonderful pass found Duncan Taylor in space.

With the line at his the mercy, the centre's attempt at an off-load to Chris Ashton missed his intended target and Sale managed to clear.

Despite the next 15 minutes proceeding to take place between the 22s, both teams had moments of inspiration as Tom Brady and Goode made surging runs.

The deadlock was eventually broken when another mistake from the visitors allowed the home side to build pressure and a powerful driving maul ended in Jones going over. Cipriani added the conversion as the Sharks went into the break 10-3 in front.

Saracens opened the second period impressively with Vunipola particularly prominent with ball in hand, but an excellent tackle by Brady prevented Taylor from touching down.

McCall's team continued to test the Sale rearguard and it paid off when Hodgson kicked a penalty to reduce the deficit.

Sarries' heavy duty pack had struggled to get a grip of their feisty northern opponents but, with the introduction of their strong bench, they began to assert control.

Another successful three-point chance from their pivot took them to within one before a high James Gaskell tackle allowed the former England international to edge them ahead.

The weather was also playing its part with the Sharks finding it difficult to exit their half due to the strong wind.

Nick Macleod then had the chance to take Sale ahead late on, but his effort missed the target and Hodgson rubber-stamped victory with a fifth from the tee.