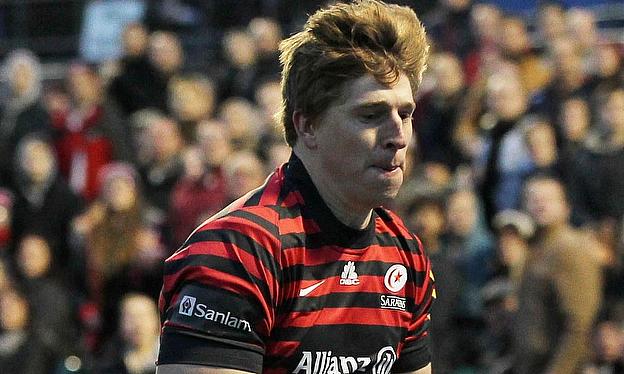 David Strettle went over for one of Saracens' tries
©Press Association

Rampant Saracens reclaimed top spot in the Aviva Premiership from their major title rivals Northampton after earning a crushing win over Gloucester at Kingsholm.

Saints took pole position following victory over Harlequins on Friday night, but Saracens shunted them out of the way in ruthless fashion.

All Gloucester could muster in reply was a Billy Twelvetrees penalty and a late Matt Cox try, but their pack was painfully dismantled, with England internationals Ben Morgan and Matt Kvesic experiencing an afternoon to forget.

The west country club might be 18 points clear of bottom club and red-hot relegation favourites Worcester, yet they barely look a top 10 team on this latest evidence.

Gloucester are horribly short of confidence, and they must now somehow raise themselves for a Heineken Cup appointment with twice European champions Munster next Saturday, before travelling to Perpignan the following weekend.

Saracens, though, will head to Toulouse in eight days' time, upbeat about their prospects of securing a Heineken Cup quarter-final place after collecting 50 points from just 12 league games this term.

Even when they had two players sin-binned in quick succession during the second half, Saracens defiantly kept Gloucester scoreless during that eight-minute period.

The Kingsholm pitch had been protected from continued rainfall by a plastic dome since New Year's Eve, and it did the job, safeguarding a fixture when many other games in Gloucestershire were postponed on Saturday.

Gloucester, though, might have wished it had not survived the elements as they fell 8-0 behind inside nine minutes and saw scrum-half Jimmy Cowan sin-binned.

De Kock briefly left the field for assessment after falling heavily on his head, but he returned after a second Farrell penalty hoisted Saracens 11 points clear as a one-sided opening quarter neared its conclusion.

The teams were separated by 25 points in the Premiership before kick-off, and such a gulf was emphatically underlined as Farrell's third penalty put Saracens further ahead.

Gloucester did not threaten Saracens' 22 until just before half-time, and although a brief spell of pressure resulted in Twelvetrees kicking a penalty, it did nothing to mask Saracens' overwhelming control of the contest.

But it made no difference, as the Saracens scrum shunted Gloucester backwards, secured possession and then moved it wide to give Goode a simple run-in.

Farrell's conversion made it 26-3, and Saracens had the best part of 30 minutes to secure a try-scoring bonus point.

Gloucester flickered into life through a sharp break by replacement scrum-half Dan Robson - Saracens number eight Billy Vunipola was sin-binned for illegal work on the ground - and then the visitors lost skipper Steve Borthwick.

Another Farrell penalty rubbed salt into a gaping Gloucester wound, although Cox touched down from close range in the 70th minute, Saracens had long since inflicted serious damage on a team that looked devoid of ideas and inspiration.