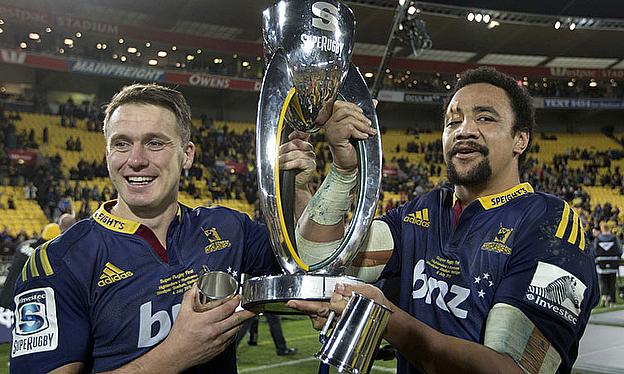 The Highlanders defied the odds as they held off a second-half fightback to clinch their first-ever Super Rugby title with a 21-14 victory over the Hurricanes  at the Westpac Stadium.

Elliot Dixon and Waisake Naholo scored a try apiece for the victors as Lima Sopoaga added two penalties and Marty Banks made sure of the win with a late drop goal.

Ma'a Nonu crossed over for the Hurricanes and Beauden Barrett claimed nine points with the boot but they could not match the strength of their New Zealand rivals in this fierce derby contest.

With both sides in search of their first Super 15 final victory, the match got off to a high-tempo start at the sold-out 34,500-seater stadium in Wellington.

The Hurricanes' home advantage went against them as the Highlanders began to dominate with Sopoaga handing his side the lead with a fourth-minute penalty.

The hosts, who claimed an impressive 29-9 victory over the Brumbies in last weekend's semi-final, dropped further behind when Sopoaga was again successful between the sticks after the fly-half missed his second penalty attempt midway through the first half.

Barrett failed with a first penalty kick as the Hurricanes looked for a way back and they found it five minutes before the break as Nonu crossed over the line in the corner and - following reviews over the grounding of the ball from the TMO - they reduced the deficit.

Barrett failed with his conversion though as he sent the ball wide of the left post.

The Highlanders struck back on the stroke of half-time with a try from Dixon, which was also awarded after a lengthy review, while Sopoaga split the uprights to hand his side a 13-5 lead at the break.

The home side clawed back another penalty as the second half got under way with Barrett again finding his range before the Otago-based outfit were on top again.

Following some great build-up play, Naholo crashed over in the corner to extend his side's lead to 18-8 after 46 minutes before Sopoaga missed with the conversion.

But the home side hit back as a more-confident looking Barrett was successful with two penalties either side of a miss from Sopoaga to leave the Hurricanes trailing by just four points with 15 minutes remaining.

The Highlanders pressed as the match wore on as they fought hard to keep their opponents at bay and Banks sealed the victory as he kicked over a late drop goal to hand his side the title.