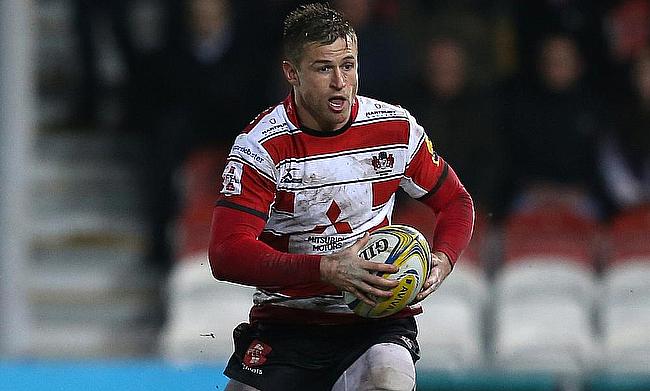 Charlie Beckett Column: What rugby can learn from The Hundred
Henry Trinder to swap Gloucester for French club RC Vannes
Book Review - From Tanqueray to the Championship: The History of Ampthill & District Rugby Club
'It is something which has become part of my life now' - Trinder

After joining Ampthill in the summer, there is perhaps a cruel irony that Henry Trinder hasn’t represented the club in a league fixture yet.

Breaking his jaw in two places in a pre-season friendly against Bedford Blues – in which the 32-year-old was captain – since late August, he has been on the touchline in the guise as backs coach.

During his career, Trinder has snapped his Achilles and even damaged his anterior cruciate ligament, lateral collateral ligament and hamstring all at once. Even the broken jaw is a reoccurrence, having suffered the same injury back in 2012.

It is a run of bad luck that has hampered a player who was considered one of the most naturally gifted talents in England. His various setbacks arguably stalled the potential for an international career and representing his much-loved Gloucester to a greater effect.

Now, he sits in a coffee shop in Cheltenham, wrestling control of his daughter as he waves a long goodbye to the West Country. The next adventure in his career takes him to Texas, where he will link up with the Dallas Jackals in their inaugural Major League Rugby season.

?? Just some of the magic delivered by @HenryTrinder during his 1??3?? years donning the Cherry & White...

?? What was your favourite memory of Henry Trinder in Gloucester Rugby colours? pic.twitter.com/UrvU1fBhCf

Whilst there is still the potential for the 32-year-old to turn out for Ampthill before he departures in the New Year, he is grateful – more than anything – for the chances that Gloucester gave to him, albeit with a hint of frustration about how the last decade or so has transpired.

“I will always look back with, not regret, but with a bit of disappointment with how my body was over the years. But the experiences that I had, the people I have met and the rugby I have played is something I will never forget.

“I will be very grateful to Gloucester in general for having kept me on for so long and to see me as part of the team. I am very lucky in terms of having the opportunity now to go and experience something different, which I am very grateful for.

“For me, that is probably a bonus that I was in that league (the Premiership), playing for so long at such a high level. Now to go somewhere like Dallas to try and teach what I have learnt and help mentor these younger guys that have got aspirations to be great in America and push on is an exciting opportunity.”

In April last year, Trinder’s departure from Kingsholm was announced. Signing for ProD2’s Vannes as a medical joker, he left the French club after the side failed to gain promotion to the Top 14. In September, his next stop on his rugby journey will see the centre move across the pond.

Originally due to make their MLR bow in 2021, Dallas opted out of doing so and are now rebuilding under their General Manager, Elaine Vassie. For Trinder, it is more than just a rugby decision. Having promised his Chicago-born wife that a move to America would be on the cards, it means it is an opportunity for grandparents to be much closer to their grandchild.

Now just a two-and-a-half-hour flight stands in the way of the young family and familiar faces, Trinder citing his conversation with the team’s GM as a reason for him deciding on the Jackals.

“I had a brief chat with Elaine in early April and she sold me her vision,” he said. “It is an exciting time to be going into the club. It is their first season and to be part of it from the beginning and add my experience and build a team from scratch, I feel it is a fantastic opportunity to be a part of something special.

“There is going to be a nice spine of experience, but then also to grow the franchise and bring those younger American guys through. I think they are doing it the right way and that is what we are most excited for – to get there, use our experience to guide the younger guys and to go out there and rip in.”

Joining a team that has also recruited further Premiership experience in the form of Chris Pennell, Ryan Bower and Todd Gleave, it is clear that Dallas are hoping to compete in their first season, rather than just making up the numbers.

With over 170 @gloucesterrugby appearances, Trinder made his Premiership debut in 2008, was awarded a Testimonial Year in 2019, and represented @EnglandRugby in 2011/2014. Recently competing for @RugbyClubVannes in France, he currently is Player/Coach at @AmpthillRufc. pic.twitter.com/V84OwvpUdv

Of course, Trinder is not the first established name from the English club game to make their way over the North Atlantic, leaving the 32-year-old with plenty of friendly faces to talk to about his move to the States.

“My main conversations were with Chris Robshaw who is at San Diego, Alex Corbisiero (LA Giltinis scrum coach), Ben Foden (Rugby United New York) as well, so I spoke to a couple of different guys to get a feel of what it was like and that was quite nice,” Trinder said.

“I am still sort of going into the unknown, as it were, but I think hearing that they have enjoyed it a lot obviously makes you a bit more excited about the whole thing and we have just started our Zoom chats, so the excitement is building now everyone is getting together and playing some rugby.”

The 2021 Major League Rugby season ended with the LA Giltinis lifting the Shield at the Los Angeles Memorial Coliseum. Beating Rugby ATL in the final, it was a landmark occasion for the league, not only because it was the third year in which a winner was crowned, but because it was a campaign that Covid-19 didn’t disrupt.

All 99 games of the regular season went ahead as planned, the league’s newest franchise the ones to come up trumps. Having had his own playing commitments to deal with in England, Trinder confesses he hasn’t seen too many MLR games thus far but is looking forward to playing an exciting brand of rugby in the Lone Star State.

“To be honest, I am very much rocking up and will have to find my feet very quickly in terms of the standard and the speed,” Trinder said.

“That is an appealing part of it. It looks like a very attractive style of rugby. Seeing highlights and watching a couple of games, I think in general (in America) everyone is trying to play this good rugby, much like in Super Rugby.

“I think that suits me. I like attacking and being aggressive in defence and having that freedom to go and express yourself. That is what I liked in France as well. You have got that extra freedom than what you have in the Premiership.

“You still see teams throw it around in the Prem, but there is always an emphasis on the security as well. It is [MLR] young, there is a lot to learn, but I think that is because of the people they have got over there. They are benefitting from that and from guys just wanting to play rugby.”

After all the talk of the journey to come, thoughts on the club Trinder currently calls home now crops up. Ampthill - who are seventh in the Championship -  take on Hartpury at Dillingham Park this weekend, and have encounters with Ealing Trailfinders, Cornish Pirates, Nottingham and Coventry to come before the New Year.

Having been given a first taste of coaching at an elite level in Bedfordshire, there has been plenty for the 32-year-old to enjoy about his stint with the club.

Just the second first-class team in England he has been involved with, Trinder says Ampthill has given him a positive outlook on the game after so many years with Gloucester.

“I have absolutely loved it,” he said. “The guys were really welcoming to me, understanding that it was my first senior coaching gig, so they have been great with how they have taken me on and helped me ease into it.

“Obviously I am gutted I couldn’t play and contribute on the pitch, but I have really enjoyed my time with the group, the coaches and the club.

“It is a community club that values the nice things about rugby and sometimes when you are in a professional environment for so long, you forget those little things and that for me has probably been the best thing.

“They are a team that has massive aspirations. Mark Lavery is really pushing the club, wants to succeed and to be part of that for even a small amount of time is fantastic.”