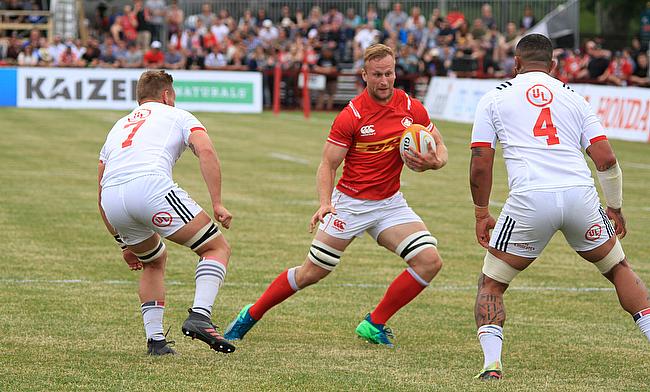 We are ready to get this thing off the ground - Smith
John Moonlight: 'Guys are going to realise that it takes a lot to be a professional.'
'We're looking to be the that factory of the Canadian national team' - Aaron Carpenter on the Toronto Arrows
Canada qualify for Rugby World Cup 2019 after beating Hong Kong 27-10

Four years ago, Matt Heaton was consigned to being a spectator as Canada took on Italy at Elland Road in Leeds during the World Cup.

Move forward to 2019, and it is a much different story. Making his international debut less than a year after that game, Heaton has been a mainstay in the international side ever since.

Playing his domestic rugby for both Otley and Darlington Mowden Park, following his decision to depart Canadian shores, the openside flanker believes that he would not have been able to make the step up to his national side if it weren’t for his time on the third and fourth rung of the English league ladder.

“I did the math one year,” Heaton began. “In Canada, if you played domestic rugby at the highest standard, which I would say is floating around Nat 2, you get maybe four or five games.

"Then, if you play club rugby, you get around 10 games, so for me to go to the UK and play 30 odd games a season at a standard that’s better than anything I can get in Canada, it was paramount."

“The big thing as well, when you are just playing rugby, you’re finding things out. It definitely was a huge, huge thing for my rugby career, just to go over there, play and be immersed in the rugby culture.

“Then, the brand of rugby that we played at Mowden for the last few seasons was great. It’s fun, we were looking to move the ball, trying to put in big hits in defence, working off the ball, it is a great brand of rugby and they’ve got a great programme, so I was very fortunate.”

Recommended to Otley by former Leeds player Mike Shelley, who was coaching the Canadian U20s side that Heaton played in, the Quebec native was snapped up by coach Mark Luffman, who took Heaton to Darlington when making the move north.

Playing close to 70 games during his time in the north-east, Heaton missed virtually the whole first half of last season with DMP due to his participation in Canada’s last ditch qualification attempts in Marseille. If Canada had failed to qualify, the tier two nation would have missed out on the tournament for the first time, leading to some expectation in the Canada camp.

“It was the first time that we could have potentially not have gone to a World Cup, so it was huge pressure and we tried not to dwell too much on it and not to think about it, letting it effect performance.”

Beating each of Kenya, Germany and Hong Kong, the Canadians avoided missing out on selection, however the pool that they have ended up in has been less than favourable. Being placed alongside the world champions New Zealand, Springboks, as well as Italy and Namibia, there is no doubt that the odds are stacked against three of the teams in the group.

However, there is one carrot left for teams to chase. Finishing third in a World Cup pool guarantees a sides qualification for France in 2023. It was Canada’s four losses at the 2015 World Cup that meant they had to fight for their place in Japan via the long route, however, Heaton hopes that his side can qualify automatically this time around.

“I think we have to be realistic. Two of the best teams in the world, playing some of the best rugby, so for games like that, it’s more of a performance base, getting things right and, really for us, targeting that Italy and Namibia game because automatic qualification is massive for tier two nations,” Heaton said.

“So, definitely we’ll target that Italy game, look to correct and try some things against the All Blacks and Springboks, then look to finish it off with a win against Namibia as well.”

Since the last World Cup, both Canada and the USA have benefitted from the introduction of professional rugby to their shores. Major League Rugby has meant that both North American sides have more professional players than ever before, leading to much improved performances for the national sides.

“The build-up (for the Rugby World Cup) started, basically in November when we qualified and from there, guys went off and did their own thing,” Heaton continued. “I think it’s the first time that we’ve had this many guys playing rugby consistently.

“A lot of guys are in the MLR, myself and Conor Keys were playing in Nat 1, we had guys in the Championship, Super Rugby, Premiership, so we had guys spread out all over. I think this is the first time that there have been this many professional rugby players.

“You can definitely see, as a squad, we are a lot better than we were in years past. Every game we are taking a step forward and sometimes we’re taking a little bit of a step back in certain areas, but the general trend is that we are getting better and better.”