Heaslip out for Ireland 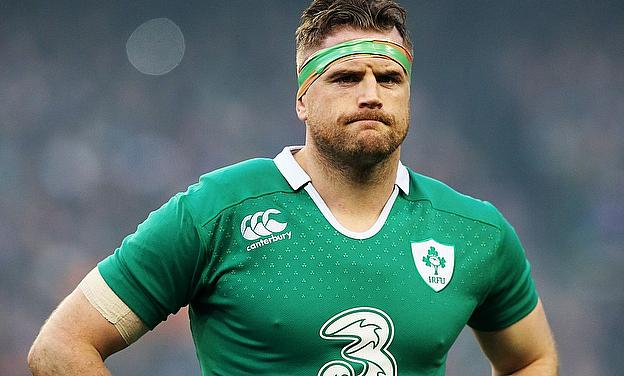 Jamie Heaslip is unlikely to feature again in Ireland's quest to retain the RBS 6 Nations title after being ruled out of action for the next month.

The 31-year-old number eight was forced out of Ireland's 18-11 victory over France on Saturday after receiving a knee to the back from Pascal Pape, who has since been cited for the challenge.

Ireland bosses confirmed Heaslip suffered "fractures of the transverse process of three vertebrae" in his back, leaving only a slim chance he could return for the final match against Scotland on March 21.

"Scans have revealed fractures of the transverse process of three vertebrae in Jamie's back," read an Ireland statement.

"Although this injury causes a good deal of discomfort it does not impact on the structural integrity of the spine, and once healed should pose no long-term issues.

"Typically this injury is treated akin to a soft tissue injury; according to symptoms.

"Jamie is already feeling more comfortable and it is hoped that he will be available to play again in approximately four weeks."

The 70-cap loose forward binds together the industry and grit of Peter O'Mahony and Sean O'Brien in Ireland's first-choice back row, and his absence is a clear loss to boss Schmidt's side.

Ireland host England in Dublin on March 1 in a match already billed as the Six Nations title decider, with the two teams the last remaining unbeaten sides.

Heaslip's injury opens the door for Leinster back-rower Jordi Murphy to step up for that all-important England clash.

Ireland can equal their best-ever run of 10 wins on the spin against England, who were the last team to beat Kiwi coach Schmidt's side, 13-10 at Twickenham in last year's Six Nations.

France lock Pape only received a yellow card from referee Wayne Barnes for his knee to Heaslip, but was cited on Monday and will appear before a disciplinary committee this week.

Referee Barnes ruled Pape's challenge on Heaslip was intentional after video review during Saturday's clash, but declined to hand the 34-year-old a red card.

Independent citing commissioner Stefano Marrama from Italy has deemed the incident worthy of further investigation however, and Pape will appear before a disciplinary commission later this week.

"Pascal Pape, second-row forward for France, has been cited by the independent citing commissioner at the RBS 6 Nations match between Ireland and France in Dublin on Saturday, for the incident in the 52nd minute of the match for which the player received a yellow card," read a statement from tournament organisers.

"When you watch the images of the incident I don't think you can say it was deliberate," said Saint-Andre on Sunday morning.

"Although we didn't concede many points it was still a pivotal moment. You expect something like that from an inexperienced player, not one with over 50 Tests under his belt. It was the worst possible moment for that to happen."