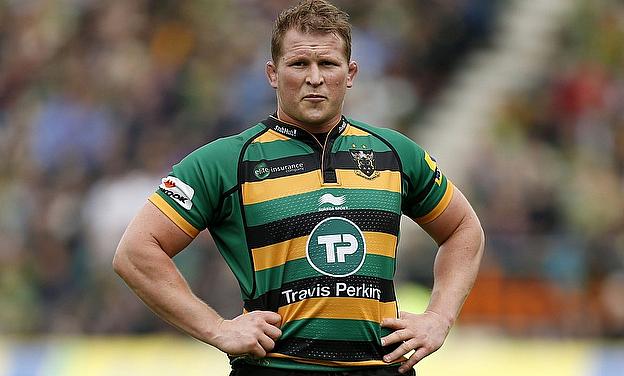 England and Northampton hooker Dylan Hartley will face a Rugby Football Union disciplinary hearing on Wednesday after being cited for foul play.

The RFU said that Hartley will appear before a three-man disciplinary panel in Coventry after he was reported for striking an opponent with his head during last Saturday's Aviva Premiership play-off game between Northampton and Saracens.

Saints skipper Hartley, who has an appalling disciplinary record, could be in danger of missing the World Cup if he is banned.

In a statement, the RFU said: "Hartley was cited following the Premiership semi-final match between Northampton Saints and Saracens for striking an opponent with his head, contrary to Law 10.4(a).

"The hearing will be held at the Coventry Holiday Inn on Wednesday May 27 at 7.15pm.

"The three-person panel will include Mike Hamlin and Tony Wheat, and will be chaired by HHJ Sean Enright."

Tuilagi pleaded guilty to one count of assault by beating, one count of criminal damage and two counts of assaulting a police officer when he appeared before magistrates in Leicester earlier this month.

And Lancaster then announced that 23-year-old Tuilagi would not be considered for selection for the national elite playing squads until January 2016, meaning he will miss the World Cup later this year.

With Northampton's season now over, any period of suspension for Hartley, who has won more than 60 caps, is unlikely to start until England begin their World Cup warm-up programme in mid-August.

Their World Cup campaign kicks off against Fiji at Twickenham on September 18.

The lower end of the scale punishment for striking with the head is a four-week ban, rising to 12 weeks or more depending on the scale of seriousness.

And 29-year-old Hartley's disciplinary record does not auger well for him, having been suspended for a total of 50 weeks during his chequered playing career.

Previous bans include 26 weeks after being cited for eye-gouging Wasps forwards James Haskell and Jonny O'Connor in 2007, and an eight-week ban following a citing for biting Ireland forward Stephen Ferris' finger while playing for England in a Six Nations game.

In May 2013, he was sent off for verbally abusing referee Wayne Barnes during the Premiership final against Leicester at Twickenham, receiving an 11-week suspension that sidelined him for the British and Irish Lions tour to Australia that he had been selected for.

Another disciplinary hearing for Hartley is the last thing that Lancaster needs as the World Cup countdown continues.

Although Leicester hooker Tom Youngs is currently favourite to be England's first-choice hooker, Hartley's experience is set to be an important ingredient as he builds towards announcing a final 31-man World Cup squad in late August.

But the England boss now faces - not for the first time - playing an anxious waiting game on Hartley's availability, and the head coach's sense of loyalty could be seriously tested.