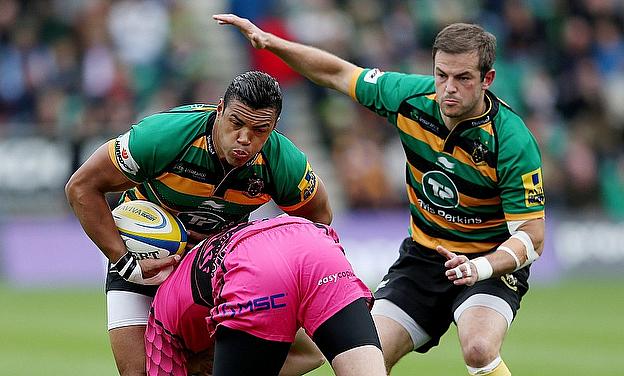 Northampton secured top spot in the Aviva Premiership for the first time in their history with a 46-0 thrashing of hapless London Welsh.

The Saints ran in six tries with England pair Lee Dickson and Luther Burrell each scoring twice and Ahsee Tuala and Jamie Elliott also touching down as the champions sealed a home semi-final with one match of the regular season to go.

Welsh held out for 13 minutes before the worst defence in the league was breached. A five-metre lineout drive was halted on the try-line before Dickson picked up and squirmed over.

The second try came from full-back Tuala, after great work from Ken Pisi. The Samoan winger caught a kick just inside his own half then weaved through the Welsh defence before offloading to Tuala, whose power took him over. Stephen Myler added a second conversion to make it 14-0 after 29 minutes.

After defending for the first 30 minutes London Welsh not only got into the Northampton half but applied pressure on the home try-line with number eight Opeti Fonua thinking he had scored when he took a tap penalty, but referee Andrew Small ruled it was from the wrong place.

Northampton held out and then ended the half with another three points from Myler's boot. Myler started the second half with three more points and a minute later Dickson had his second try and Saints' third. Welsh had a second lineout in a row nicked and Northampton quickly spread play to the right wing where Tuala neatly off-loaded to Ken Pisi and with one defender left he sent Dickson over from 20 metres. Myler missed the conversion.

Welsh may have been heading for a straight 21st defeat but they did muster the most skilful moment of the match when Fonua's offload to Paul Rowley was followed by a sublime chip, which he caught only for the attack to be ended by a turnover.

Jamie Elliott looked to be on his way for the bonus point try as he charged down a Tom May kick on the Saints 22. He hacked ahead, but amazingly replacement hooker Nathan Morris kept up to tackle the winger as he tried to pick up the ball and stop the attack.

A minute later England centre Burrell should have scored as he charged onto a Kahn Fotuali'i pass to take it on the 5 metre line with a gaping hole ahead, only to drop the ball.

But Burrell made up for the error shortly afterwards as sustained pressure saw him score from a pop pass by Myler. The centre kept the legs pumping to drag his tackler and touch down.

The bonus point secured top spot in the Premiership and signalled Saints could empty their bench, resting a limping Myler. But Burrell stayed on to hand-off Olly Barkley and score his second try, which James Wilson converted.

With Eddie Aholelei in the sin-bin and the five points secured Northampton ended the game with a sweeping move that saw Elliott trot over in the left corner.