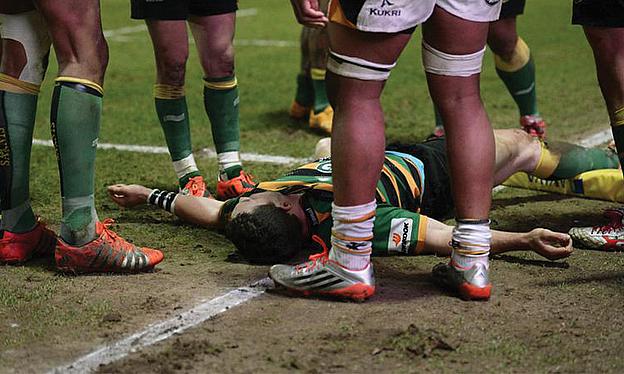 Wales and Northampton star George North says his recovery from concussion is "looking positive" and has played down Warren Gatland's worries ahead of the Rugby World Cup.

Wales coach Gatland has admitted he would prefer North to sit out the rest of the Aviva Premiership season and not play again before September's World Cup for the player's own safety.

However, the 23-year-old wing, who has suffered four head injuries in the last five months, is focusing his efforts on getting back to health and told The Daily Telegraph of his recovery: "It's looking positive.

"I am symptom-free at the moment and going through the return-to-play protocols.

"I am doing that over a two-week period rather than the normal one week, so that I get plenty of time to recover.

"I am following the advice of the physios, doing everything that they advise. It is a step-by-step thing and that is what I am doing at the moment."

Gatland said at the weekend that if North suffered another head knock it would rule him out for up to a year, and hinted it could be the end of his career.

The New Zealander said: "If he gets another knock he's going to have to be out for six months or a year. He has been out for a considerable amount of time but he's such a young player that if he picks up two or three more of those in the next year, that's going to finish his career isn't it?"

North's desire to score tries on the dry and quicker pitches is clear, but so is his focus on not rushing back too soon.

He added: "This is my time of the year, isn't it. When you dig in through pre-season and then through the winter months of December and January, you want to get to when the weather is better, the pitches quicker and you want to be able to play some good rugby.

"Obviously, again, I have got to take my time with this and get it right."